Still on the Bus and Ida B. Wells

Well, I'm still on the bus, headed for Boston. According to our itinerary, we will have spent Thursday at Niagra Falls and Fort Niagra, and then stopped for the night in Syracuse. Friday, we will be back on the bus EARLY, and headed to Boston -- first stop, the Freedom Trail. It looks like it will be an fun, but action-packed day!

Before I left on 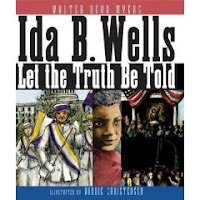 the bus, I had a chance to read a picture book I had gotten as an ARC back in June (thank you Sally!). Ida B. Wells, Let the Truth Be Told by Walter Dean Myers is a book that humbled me. It humbled me for 2 reasons: 1) Ida B. Wells was an amazing lady, and 2) I'm not sure I had ever known about her before reading this picture book.

Ida Bell Wells was born in 1862 to parents who were slaves. Three years later, that changed with the Thirteenth Amendment. Ida went on to school where she learned much, at the same time becoming more and more aware of the injustice to blacks, specifically lynchings. When Ida was 15, her parents and one of her brothers died of yellow fever. Ida went on to get a teaching degree, and also raise the rest of her brothers and sisters.

That alone is amazing feat, but Ida B. Wells was not done with her accomplishments in life. Important things to know about her:

1) On a train, when she refused to leave the ladies' coach, she was dragged out by the conductor, and moved to the smoking car. She decided to sue the railroad and won. Unfortunately, the court's ruling was later reversed.

2) She was a prolific writer. She started by writing in a journal, and then moved on to writing for her chuch paper and some black newspapers. She eventually went on to be part owner of one of those newspapers.

3) In 1892, friends of hers were arrested by a white mob, and then murdered. Ida used her writing as a weapon -- in her newspaper, she encouraged black people im Memphis to economically boycott white businesses.

4) Because of the angry white reaction to her boycott suggestions, she moved to New York, and then Chicago. She started writing articles about the poor treatment of black people, and wrote much about the crime of lynching. She wanted justice for all. She eventually published a book on the topic of lynching.

6) She was one of the major speakers and organizers of a group that eventually became the NAACP.

7) Ida marched for, and wrote about, suffrage with her friend, Susan B. Anthony.

Ida B. Wells: Let the Truth Be Told is a testament to an amazing woman. On a slight soapbox here -- if it's our job as teachers to prepare our students for coping in the real world, then exposing them to people who have fought for social justice should be an important part of what we do. Ida's story, and many others like hers, are important stories to share.

This book is important, also, because it shows how powerful the written word can be.
Posted by Karen at 6:00 AM