So it seems like fantasy is the genre of the year to me, maybe because I've just started paying attention to it, but all of my reading lists are heavy with fantasy. Since I've read so much of it lately, I've come to figure out what characteristics I like in the fantasy books I read. First, I like stories that mix the real world with the fantasy world, and the characters cross back and forth easily. Second, I like fantasy without a lot of weird creatures that I have to remember what they are and if they are good or evil. Third, I like fantasy with character names that are not too out there and hard to pronounce. OK, so I'm not a hardcore fantasy reader, but I have come to appreciate the genre more in the last year. I've moved beyond my Harry Potter phase and have found some good stuff. My latest read is a perfect example. 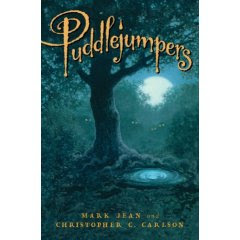 s by Mark Jean and Christopher C. Carlson meets all of the above criteria for me to call it good fantasy. In addition to all of that, it has good mystery, great suspense, and exciting battle action! What more could you ask for.

The story begins with the birth of a baby that is identified by Puddlejumper prophesy as "The Rainmaker" who has been sent to save their people. The Puddlejumpers are elf like creatures with webbed feet that move between the underneath world and the above world through puddles. They depend on water for their entire survival. The boy's mother dies during child birth and two Puddlejumpers, Root and Runnel are sent to help raise the Rainmaker until they can safely kidnap him.

The Puddlejumpers are opposed by an evil tribe of beings called Troggs. Troggs are big, hairy, ugly things that smell through a nose on the end of their long tails. Gross, right? In an exciting chase scene, the Troggs chase the Rainmaker through the snow and ice and eventually they all get separated. The Rainmaker who has been named Shawn by his father is found by a trucker who takes him to a boys' home in Chicago where he spends his first 13 years going by the name Ernie Banks and being abused by the caretaker.

Through a totally believable set of circumstances Ernie ends up back on the farm where he was born through a program that gets troubled boys out of the city for the summer. The Rainmaker/Shawn/Ernie is reunited with his father. The family farm and the small community surrounding it are all failing due to a lack of rain. Shawn/Ernie begins to investigate with the neighbor girl Joey and they stumble upon the underground and Shawn/Ernie's ability to puddlejump.

From this point the book gets too exciting to put down, I had to stay up to finish it. It involves undercover Troggs, a sheriff on the take, Shawn/Ernie shrinking to the size of a Puddlejumper, and an epic battle between the Troggs and the Puddlejumpers led by The Rainmaker!

The writing and language are superbly done and hard to put down. The authors' description of autumn life on the farm before Shawn is kidnapped is perfect!

He took a deep breath. There was a sweet crispness in the air that promised winter but remembered summer.


This is a book for better readers, probably upper elementary, but it hooked me from the first chapter and held me to the end. I'm pretty sure the kids will feel the same. This definitely qualifies as one of my favorites of the year!