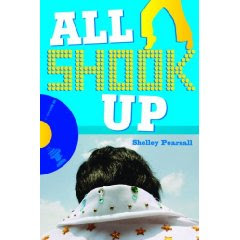 There are plenty of good books about broken families out there, but Shelley Pearsall adds a new twist, no pun intended, but enjoyed never the less!

In All Shook Up, 13 year old Joshua Greenwood's parents are divorced. He lives with his mom in Boston, and his dad lives in Chicago. It's clear from the beginning that Josh doesn't have a lot of contact with his father and is much more comfortable with his mom. Mom is a list maker, rule follower, and doesn't deal well with people who don't have a plan or when her plans are mixed up.

When Grandma breaks her hip in Florida, Josh is sent to live with his dad in Chicago. We're not talking a short visit here, he will be enrolled in school and it could be several months. As usual when dealing with his parents, Josh doesn't get a lot of say in the matter, and he has learned it's easier to just go with the flow, so he's packed on a plane and takes off for Chicago.

Dad is the furthest thing from Mom. No lists, not much plan, little communication and he's late to pick Josh up at the airport. Imagine Josh's surprise/embarrassment when his dad shows up in a loud Hawaiian shirt, blacker than black dyed hair, and some ugly sideburns. Josh tries to walk ahead of him so that people won't associate them together.

As it turns out, the shoe store where Dad, Jerry Denny, worked for 15 years went out of business and now he's out of a job. On a whim he enters an Elvis contest at the local mall, and wins. Lo and behold, Jerry Denny has a new career, ELVIS IMPERSONATOR!

Shelley Pearsall does an outstanding job of exploring the emotions of Joshua Aaron Greenwood, "divorced kid." Divorce is tough enough on a kid, adjusting to two homes, dealing with the feelings that it might be your fault, anger and bitterness, new relationships and Pearsall covers them all with honesty, and humor. Throw in the fact that Josh's father goes out in public dressed as "the king" and the humiliation keeps on growing.

I love the way Shelley Pearsall forces Josh to interact with people he wouldn't ever associate with on his own. The situations are real, not forced at all. Some important lessons can be learned by students who read this book if they are paying attention.

All in all, I liked this quick read a lot. The ending is, again, real. Without giving anything away, let's just say it ends right and all . Everyone happy, with their station in life, and Josh accepting, not loving his father's new life.

Go here to see all of Shelley Pearsall's research into Elvis Impersonators. Very extensive!
Posted by Bill at 10:40 AM