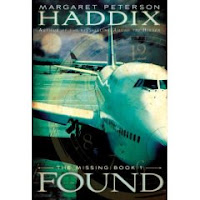 I was browsing in my favorite children's bookstore, Cover to Cover the other day, when Franki (A Year of Reading) pointed out a book that has gotten a lot of buzz recently. It was from a new series by Margaret Peterson Haddix called "The Missing". The book is called Found.

I was so mesmerized by the intrigue in this book that I started and finished it all in one afternoon. I am not usually a fan of science fiction, but this book had me on the edge of my seat the entire time I was reading. The fact that the "heroes" in this book are two 13 year old boys, and one of the boys' 12 year old sister, really made the action in the plot line more meaningful to me.

The story starts mysteriously with a prologue where a plane just "appears" at a gate at the airport, but no one gets off. When a new employee finally goes onboard to see what is happening, she discovers 36 babies, one in each of the seats. No one else, including the crew, can be found.

Fast forward to chapter one which starts 13 years later, when we meet our main characters: Jonah, Chip (his new friend), and Katherine (Jonah's sister). We quickly find out that Jonah was adopted into his family and Katherine was born into the family. Shortly after that, we learn that Chip finds out he was adopted, also (he was unaware of that fact for 13 years). Then, both Jonah and Chip start to receive anonymous notes in the mail:

"You are one of the missing."
and later
"Beware! They're coming back to get you."

I don't want to spoil this book for anyone by divulging too much (there are important surprises and plot twists and turns throughout the whole story), but the rest of the book contains many interesting things:
- breaking into a safe
- a trip to the FBI
- ghost-like appearances
- a list of witnesses
- a list of survivors
- time travel
- a device called "the Elucidator"
- the partial knowledge of exactly who "the missing" are
And that's just naming a few!

What I do know for sure is that the last chapter, and especially the last page, left me wanting much, much more! After checking around online, it would appear that the next book in the series is called Sent, and it is due out in Spring 2009. The last time I felt myself feeling this way, dying to know what happens next, is when I finished City of Ember -- such a cliffhanger!! For that same reason, I'll be anxiously looking forward to the second book in The Missing series. Found was a great book, but I have about a bazillion questions after finishing it. I'm hoping the next book, Sent, will help answer those questions.
All that being said, Found would be a great book for anyone who loves science ficiton or things involving time travel!!