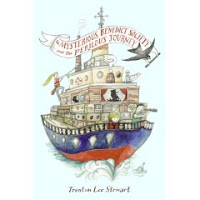 This book actually begins with a reunion of the characters at the farm where Kate currently lives with her newly discovered father (in the first book), Milligan. This reunion was a perfect device to help my over-50 brain remember some of the minor, but important, characters from the first book. There's Kate and Milligan. Then, there's Reymie and Miss Perumal and her mother. Finally, Sticky and his parents, the Washingtons.

The reunion begins when Reymie, Sticky, Miss Perumal, her mother, and the Washingtons all arrive at Kate and Milligan's farm. They spend some time catching up on one another's lives, and then they head out to visit Mr. Benedict, Constance (who lives with Mr. B now because he's adopting her), Rhonda, and Number Two. Unfortunately, the merry group arrives to find out Mr. Benedict and Number Two have been taken by the dastardly Mr. Curtain (Mr. Benedict's evil brother / villain of the first book, also).

This is where the real fun and action begin -- the kids solve the first of many puzzles that Mr. Benedict has left for them, and then armed with that knowledge, they sneak out of the house and head off to save Mr. Benedict and Number Two from an awful fate.

Along the way, they meet some interesting new characters. They take a ride on a ship called the Shortcut, where they meet Captain Nolan and Cannonball. Though these two characters are helpful in the beginning, their importance is made more clear by the end of the story. The children also soon encounter the real bad guys of the story called the Ten Men. The Ten Men carry briefcases, and have 10 different ways to hurt/kill someone, therefore, the name Ten Men. I felt they were the "real" bad guys of the story, especially in a a couple of nerve-wracking scenes toward the end of the book. It seemed like Mr. Curtain was a more minor character for most of the book.

And then there's Milligan who plays a much more important part in this book than in the first one. He is a character with real determination and grit. He is in the spy business, he's great at disguises, he's very smart, and he certainly knows how to fight, even when he's horribly outnumbered.

Between the puzzles and riddles from Mr. Benedict, the traveling to exotic places the children do because of the clues from the puzzles they solve, the new characters, the new and improved Milligan, a couple big fight scenes, concern for Mr. Benedict's welfare, The Perilous Journey was a real page-turner. I was able to finish it in one day, and I thoroughly enjoyed it!!

What's even more fun is that Stewart left the door wide open for a possible third book. We'll have to wait and see if he's just teasing us, or if there will be another book which would allow us to spend some more time with these precocious children and the adults who care for them!!

Other reviews of this book:
Bookshelves of Doom
Read, Read, Read
Help Readers Love Reading
Shelftalker (there's a great link here to take a personality test and find out which MSBS character you are most like!! I was most like Reynie. )
Posted by Karen at 6:00 AM