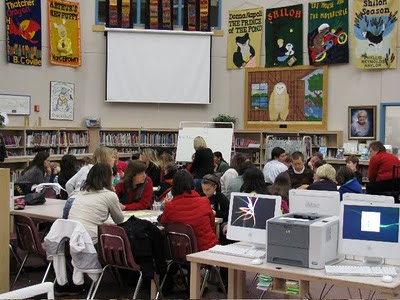 So if you follow Literate Lives closely at all, you know that I'm a big fan of Also Known as Harper. I had high hopes for it during "awards season" but unfortunately it didn't win. It was probably my favorite book of 2009. I knew immediately after finishing it that it would be included in our Grand Discussion line up this year, and so, last night we discussed it.While we didn't quite have the crowd we had at the first one of the year, it was a nice manageable size group and we all fit in the library. 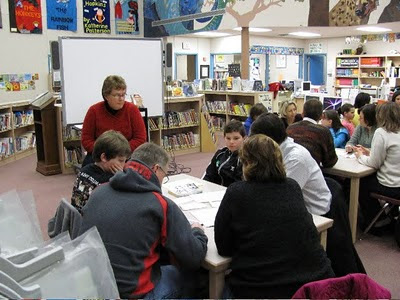 We also had some special guests, my sister Martha Crone (in red) a teacher in Ashland, and the librarian, Jan Miller, from her building joined us to see how the whole thing worked. They hope to do something similar at their school. 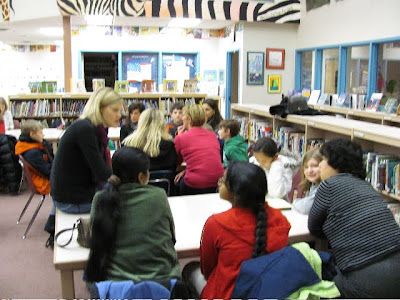 We were also joined by Dionne Dukes (on the table) another enrichment teacher from our district who may start a discussion at her building.

As usual, a good number of folks came in wondering why I picked the book as it was sad, depressing, one thing after another, nothing positive, etc. But in the end the crowd had turned and appreciated Harper for it's message and teachable moments. 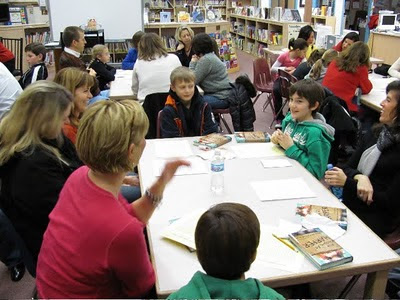 One mom even thought it should be put on a shelf and brought back out when the kids reach high school and read To Kill a Mocking Bird, she saw a great comparison paper in the making.

I like to pick books like this, books that make the kids and parents think about the world outside of our community, but that's not the only criteria, author Ann Haywood Leal used language and technique to create a memorable story. 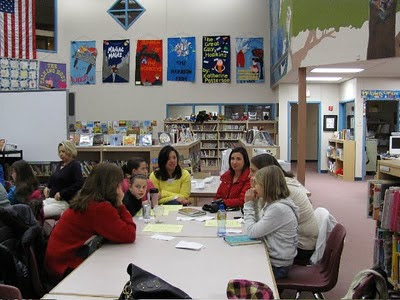 I've promised to lighten things up a bit next time. We're going to read The Mostly True Adventures of Homer P. Figg, the recent Newbery honor pick.
Posted by Bill at 5:40 PM