3 Picks From THE PIT 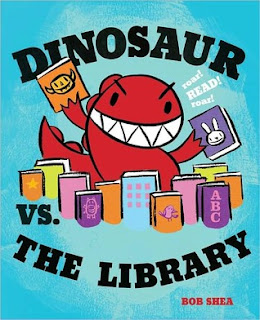 It's been a busy year in THE PIT, I've already shared 10 fun read alouds with the kids, and some are already coming out on top as favorites. Here are three that have been HUGE hits in THE PIT!

Dinosaur vs. The Library by Bob Shea: I read Dinosaur vs. Bedtime a couple of years ago and it was so much fun (that means LOUD) that when I saw the dinosaur was taking on the library, I had to read it in THE PIT. It doesn't disappoint and probably my favorite part are the baby chicks that look a lot like tennis balls with legs that follow the dinosaur through the story. When the dinosaur arrives at the library and the text says something about roaring where no one has roared before, there was always at least one of my kids that said, "Except for this library, you roar all the time!" I guess I've earned the title of The Loud Librarian and I wear it proudly. This is the second Bob Shea I've read this year, we also did I'm a Shark to the delight of the Bailey students. I can't wait until February when Bob Shea will visit Dublin for our annual Dublin Literacy Conference. After viewing his video about the Dinosaur books, I'm pretty impressed with his roaring!

I Want My Hat Back by Jon Klassen: I LOVE THIS BOOK! The bear loses his hat and walks through the woods asking various animals if they have seen it. The rabbit is wearing a red pointy hat but denies

everything. In the end the bear solves the mystery and gets his hat back. This creates a new mystery, what happened to the rabbit? We discussed this in THE PIT, does he eat the rabbit? sit on and squash the rabbit? stuff the rabbit back in the hat and put it on his heat? It's up to the reader, but the bear does have a bit of a denial problem just like the rabbit. My favorite reaction to the book came from Franki at A Year of Reading. As she read the book she kept saying that she didn't see what was so funny, when she got to the end, she totally cracked up and was hooked! It was such a sudden change in responses to the book that it made me laugh too! 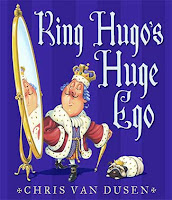 King Hugo's Huge Ego by Chris Van Dusen: I love a good rhyming story and this is a good rhyming story. King Hugo is a little man with a, well, you probably guessed it, a huge ego. He goes around making people bow down to him and speechifying about how wonderful he is. When he crosses a sorceress, she casts a spell that causes his head to swell every time he brags. By the end he's looking like a Macy's Thanksgiving Day Parade balloon.

As with all fairy tales, he finds out the reason for his fat head and changes his way. Just a heads up, this one has a bit of a romantical ending that made me break into a little bit of "Love is a Many Splendored Thing" and caused a good bit of squirming in THE PIT!
Posted by Bill at 10:41 AM 2 comments:

I told my blogging partner Karen that I hadn't posted in a while, just wasn't inspired and didn't feel like I had much to say. As I look back on the first month of school, however, I realize how busy and frantic it has been, that may have had something to do with my lack of inspiration.

In the first month of school, Super Aide Yvonne moved every book in the non-fiction and fiction sections of our library. They installed an Epson Brightlink system and we had to make room for the board. Oh yeah, I've been trying to figure out this new system which I think I really like!

I reviewed and purchased nearly 60 new titles for the library. We then had to catalog and process them for library use.

I chose and read 6 new books in THE PIT;
Those Darn Squirrels and the Cat Next Door by Adam Rubin
SkippyJon Jones: Class Action by Judith Schachner
The Book that Zack Wrote by Ethan Long
You Will Be My Friend by Peter Brown
I'm a Shark by Bob Shea
The Greedy Sparrow by Lucine Kasbarian

I have been working on updating the Amazing Library Race using QR codes hidden in books for clues. I've run into a bit of snag in that I can't find a reader that works consistently on the desktop computers in the library. I'm working on getting some iPods with cameras but if anybody knows of a good QR reader for Mac desktops, please let me know.

In addition to all of these things I've been teaching the early library skill units, keeping up with things at home and this week book fair gets delivered and set up.

WHEW! I think I need to sit down with a stack of good books and watch the Buckeyes play football!
Posted by Bill at 2:28 PM 2 comments: