Middle School Transition Can Be Tough 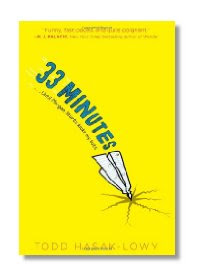 It's no secret that moving from the safe confines of elementary school to the mean streets of middle school can be a difficult and even scary transition.  I'm always on the lookout for books that use this theme so the fifth graders in the Bailey Bubble can have a look at what is on the other side of elementary.  Hopefully by reading them they learn that it's not as bad as they imagine, but that it won't be easy either.  33 Minutes Until Morgan Sturtz Kicks My Butt by Todd Hasak-Lowy is a good one for my collection!

People change as they get older and friends grow apart.  Sometimes it's just a gradual parting of the ways and sometimes, as in the case of Sam Lewis and Morgan Sturtz, it's a more drastic event.  Sam and Morgan are best friends all through elementary.  They are inseparable, always together, and they make a great team.  When a new kid, Chris, moves to town trouble starts.   Chris is pretty much unsupervised and has everything a kid could want.  Morgan and Chris start spending a lot of time together, and Morgan begins to change.  As is the case with middle school, some boys grow and others wait a while.  Morgan grows and becomes the football star, Sam doesn't and becomes the mathlete star.

Eventually there is a time when they just don't see eye to eye, and instead of just going their own way, words are exchanged, and a note is passed accidentally with Sam mocking Morgan's lack of math ability.  The threat is made and the clock is started.  Each chapter is a time of day with a countdown to the butt-kicking.  Typical middle school hyjinx occurs, with food fights, popular kids and bullies.

In the end, the fight does take place and the boys are brought to the principal's office and that may be the real strength of this book.  Instead of wrapping it all up in a nice Brady Bunch ending, Todd Hasak-Lowy offers up alternative endings.  The reader isn't really sure which it is but they are all possible and realistic.  It's up to the reader to figure out which fits for them, great discussion starters.

The author does a wonderful job of describing middle school, it's personalities, teachers, atmosphere and students.  I'll be recommending this a fun informative summer read for my fifth graders.
Posted by Bill at 9:48 AM 5 comments: