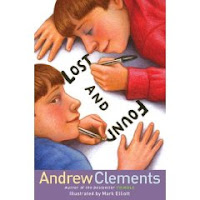 Lost and Found is the latest book published by the prolific Andrew Clements. As with most of his books, the main setting of the story is a school. The premise of the story, twins struggling to find their own separate identities, is a good one.

The twins, Jay and Ray Grayson (no, I didn't mistype that) have just moved into a new school. On the first day, Ray has to stay home ill. While at school, Jay soon realizes that there is no record of both of the twins at their new school; only him. So, the plot thickens -- the twins decide to start taking turns as to which one of them will show up each day and be "Jay" Grayson. As their trickery continues, what each boy realizes is that he really enjoys being a "stand-alone" person, and not a twin.

The lengths the boys go to in order to maintain the facade of only being Jay Grayson is at times funny, and at other times, slightly confusing. From the beginning, you realize that inevitably the boys' plan will go awry, adults will find out, and there will be consequences.

Clements did a nice job helping me, a non-twin, understand the difficulty a twin might have in trying to establish his/her own individual identity. My favorite part of the book is the last page and last illustration where it shows the twins' feet going in two separate directions at school -- in some small way, the boys are able to achieve the goal of some independence from each other.

The idea behind Lost and Found is a good one, but I think this book plays to a more limited audience (twins) than some of his books that were favorites for my class and me this year -- Frindle and No Talking.

Don't get me wrong -- I will definitely be adding Lost and Found to my Andrew Clememts collection. I still feel he is an author that has maintained a "feel" for some of the issues that happen to children in early adolescence (5th and 6th grade), and he can relate to school issues as well. And truthfully, kids just love reading his books!! They enjoy the topics that are familiar to them, and they enjoy the comfort of the text in chapter format, combined with the occasional illustration (done again in this book by the same illustrator for No Talking -- Mark Elliot). Personally, I just loved other books of his more.

I will be interested to talk to the first students that pick it out of the "new book" section at the beginning of the year...
Posted by Karen at 6:00 AM