Horse Races... On the Beach??? - Slice of Life Challenge 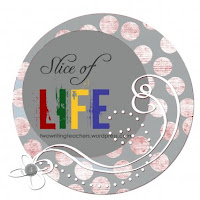 On Sunday, I saw something I've never seen in all the years of going to beaches anywhere.

My husband and I walked outside and down to our right, we passed two LONG rows of people in beach chairs, facing each other about 25 yards apart.  There were ropes in front of each group, keeping them in specific locations.  Each row was at least as long as a football field, maybe more.  About half-way down the row, I noticed many people wearing orange shirts, looking official.  I made the decision that these were the people who might be able to unlock the mystery of this whole scenario, so I went to talk to them while my husband waited patiently for me down by the ocean.

Turns out that this was the day of the Tacky Horse Races.  Yup, you heard me correctly.  There were going to be horse races on the beach.  From my discussions with the orange shirts, I learned that the Tacky horse was a horse brought over from Spain to this area, and it became a workhorse for people in the Gullah communities.  I was never quite clear on why they decided to start racing them, but I was told that it happens in many places; this was just the second time ever that it occurred in Hilton Head.

But it must have been an event people embraced because when I looked at the fans lining the race course more carefully, I realized that all the women were wearing hats, and not just any hats.  Hats that were decorated with flowers, balloons, flamingos, and much, much more.  What a hoot!  They had come dressed for the horse races.

One of the orange shirts told me that last year's crowd was 5,000-strong, and they were expecting even more this year.  They had held the race in February last year, but had to wait until low tide hit at just the right time, which backed them up until Sunday, March 18.

The picture above was taken two hours before the horse races began; the crowd just got bigger and bigger from then on.  Because I was so late to the party, it was hard to find a good location to watch, so I wandered back to my beach chair and read awhile before the races.  Then, at 1:00 PM, I headed back to watch the first few races.  It was more fun to watch the people hooting and hollering than it was to watch the actual horses.

Not a typical Sunday at Hilton Head.  Horse racing on the beach... who knew??!!


As always, thanks to Stacey and Ruth at Two Writing Teachers for hosting the Slice of Life Challenge!
Posted by Karen at 9:50 AM

Email ThisBlogThis!Share to TwitterShare to FacebookShare to Pinterest
Labels: #slice12, #SOLC, horse racing on the beach, Slice of life challenge