Turtle in Paradise Another Good One From Jennifer Holm 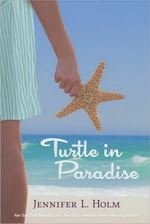 Like Franki at A Year of Reading, I'm a big fan of Jennifer Holm. While I don't love Babymouse, I guess that makes me some sort of cold hearted monster, Penny From Heaven and Middle School is Worse Than Meatloaf, are two of my all time favorites. So needless to say, I was pretty excited to see Turtle in Paradise on the new book shelf at my local library. I brought it home and it served as incentive to finish the book I was in so I could read it. I finished the book in about two hours and was not disappointed.

The story takes place in Depression Era Key West. Now I've always known that Key West has a culture all its own, but I have never read much about it, especially not in kids' books. When Turtle is taken to Key West to live with her mother's sister, it's a surprise to her Aunt Minnie. In the time of no email or telephones or internet, the mail was slow and inconsistent s 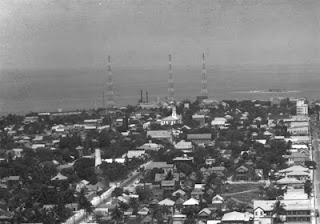 o Turtle actually arrives before her mother's letter telling everyone she is coming.

I like Turtle, she's spunky and tough and won't let anyone take advantage of her, even her conch cousins and their friends. It's a group of boys who remind me of Spanky and the Little Rascals and they run a babysitting business where they pick up crying babies and pull them around in a broken down wagon all day to give their mother's a rest. They also use their secret diaper rash remedy on the babys' bungies to ease their discomfort. Turns out the remedy is corn starch but you don't find that out until the end.

Jennifer Holm is awesome at writing about family relationships and Turtle in Paradise is no exception. Turtle's mom is a single parent who dates a lot of losers and works as a cleaning woman in wealthy homes, sometimes that works out for Turtle and sometimes it doesn't and her mom must move on to the next job. Even though Turtle's mom doesn't appear often in the book her presence is felt throughout and we learn that Turtle has been forced to become fairly self sufficient and make important decisions since her mom seems incapable of doing it on her own.

While in Key West, Turtle is introduce to a very old lady named Nana Philly who lives in a big run down house and scares all of the kids on the island. When Turtle is recruited to take her lunch she learns what a cantankerous old soul she is, but she doesn't scare Turtle. When she tries to, Turtle stands up to her and eventually the two become friends, sort of. Turtle finds out Nana Philly's story and some interesting history about how the two of them are connected.

All in all, Turtle in Paradise is a perfect, quick, summer read. I loved the humor and the gang of kids, so much personality. My only problem with the book was that it ended too quickly, I wanted more closure to some of the story lines but didn't get them. The author's notes at the end were extremely interesting to me, finding out that Jennifer Holm's family can trace themselves back to Key West and some of the characters are based on family members and other real folks from her past.

Other Reviews:
Welcome to My Tweendom
Bookends
Posted by Bill at 6:56 AM