48 Hour Challenge: 2 Down With a Gordon Korman Follow Up 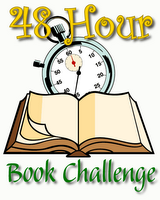 I was very excited to find a third book in the Gordon Korman Swindle series. Readers of Literate Lives know I love these books. Griffin Bing AKA The Man With the Plan is an awesome character who is surrounded by a group of friends that make for great stories.

In Framed, coming out in September, Griffin is still The Man With the Plan, but this time he's under house arrest and his friends have to work without him much of the time. When a Super Bowl ring is stolen from the school trophy case, the new principal, Dr. Egan, blames Griffin based on his reputation and the fact that his retainer is found where the ring used to be.

What follows is Griffin being sent to an alternative school for kids that break the rules. When he tries to catch the real thief and gets caught, the judge then puts him on house arrest under his parents' supervision. Next the gang sets up an elaborate surveillance of the principal's house including Griffin with a computer link. When that fails, Griffin gets to wear an ankle bracelet that lets the police know when he strays too far from home.

Korman introduces us to a new member of the gang, Sheldon Brickhaus, a fireplug of an 8th grader that Griffin meets at his new school, JFK, or Jail For Kids as it is called. He's a stree

t tough with a bad home life but turns out to be a loyal friend.

Framed is a great follow up to Swindle and Zoobreak. It's every bit as exciting and action packed as the other two. Kids are going to love it.

Now I'm off to some grad parties and then home to start Little Blog on the Prairie, an ARC I picked up yesterday because I couldn't resist the title.
Posted by Bill at 11:57 AM