See How They Run Gets My Vote! 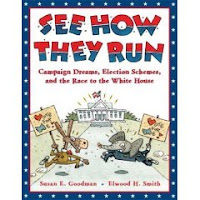 I love the title of this book -- very catchy! The full title is See How They Run - Campaign Dreams, Election Schemes, and the Race to the White House, and it is written by Susan E. Goodman. The inside of the book is as fun as the title.

It was hard for me to decide what kind of book this actually was. I know it's informational nonfiction because I learned a lot of information about elections and campaigns. I think it's also a picture book, and an enjoyable one at that, because the illustrator, Elwood H. Smith, has drawn some very fun, but informative pictures throughout the book. Finally, it has to qualify as a reference book as well, with Presidential facts section in the back. Regardless of type, it's a great book for kids!

The Table of Contents lets the reader know that the book is divided into five sections: A Short History of Democracy, See How They Run, It's Showtime, Hail to the New Chief, and Uncle Sam Wants You. All are fun and engaging titles, and underneath each title, the author has listed subtopics. Goodman's play on words with these titles and subtitles will be great conversation in my class as we talk about how to do similar things in the students' own writing.

Then, the back of the book has all the stuff good nonfiction should: glossary (a fabulous one at that!), Presidential facts, Sources and Resources (more about this later), Acknowledgements and Picture Credits, Index, and an author/illustrator page called "See Who Ran to Create this Book" (more about this later, also).

In a year of historic primaries and elections, this is a perfect book to share with kids!!! See How They Run is written with kids in mind -- very kid-friendly language, with great illustrations and graphics. It's also great that this book was released in 2008, so the information inside is very timely, and not dated. It starts by giving kids a historical background of elections, moves into the primaries, campaigns, and conventions, talks about what happens after we elect our new President. It's a book that could be read cover to cover, but I plan on sharing snippets with my class in the fall.

One of my favorite parts of this book (and there are many!!) is the very last chapter, the last subsection, titled "A Preachy but True Ending." Goodman does a great job of explaining to the kids how things have changed over the years -- women got the vote / now Hillary Clinton has even made a bid for the White House, African Americans were slaves and definitely couldn't vote / now Barack Obama is the apparent Presidential candidate for the Democrats, we didn't use to have religious freedom / since 1960, we've now had a Catholic President - Kennedy , a Jewish man, Joe Lieberman, campaigned in a primary for President, and a Mormon man, Mitt Romney campaigned this year in the Republican primary for President. Chamge has occurred because people banded together to make the change. This section really encourages students to get involved and try to make a difference -- what a wonderful civics lesson!!

In the Sources and Resources section in the back, I really appreciated as a teacher, that each section of sources starts with a message for children about why that section is important, and how kids can actually utilize and access some of the resources themselves. It's yet another example of how I could tell this book is meant to be FOR KIDS. Goodman has a clear target audience, and she serves them well.

Finally, when I read the author/illustrator page, I realized why these two names (Susan E. Goodman and Elwood H. Smith) sounded so familiar -- they had collaborated on two other books: The Truth About Poop and Gee Whiz! It's All About Pee. They share that they have voted in every possible presidential election since they were old enough to register to vote. Another great civics lesson!

I found See How They Run at my local public library, but will be purchasing it soon for my classroom. It is the perfect election book for kids ( I actually know some nonvoting adults that should read it as well)! Like I said, it definitely gets my vote!
Posted by Karen at 10:47 AM