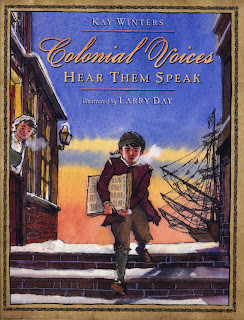 The new book shelf at my branch of the library is one of my favorite places to go each time I visit. I have found many great titles there, and most of them have appeared here at one point or another. Colonial Voices Hear Them Speak by Kay Winters is another surprise find for me.

The story is written from the viewpoint of the craftsmen, shopkeepers, citizens and slaves of Boston in December 16, 1773. An errand boy for a Patriot newspaper tours the city, visiting each person who gives their story and perspective on independence leading up to the Boston Tea Party.

Each Bostonian is represented in an almost free verse poetry and their opinions are expressed loud and clear through the authors strong vocabulary. For example, the blacksmith's slave says:


Men sit in his shop and talk of tea,
taxes, liberty, and freedom.

FREEDOM FOR THEM, BUT NOT FOR ME.

Strong opinions which will lead to great discussion in the classroom. As a former fifth grade teacher I can see endless possibilities for this book and the writing that could come from it.

From the Native American basket trader:

We will not fight their battle. It matters not who wins or loses. OUR PEOPLE HAVE ALREADY LOST.

I love this Native American perspective of the Revolution that many times gets lost in the classroom.

From the Son of Liberty in Old South Meeting House:

"NAY!"roars the crowd. "NAY!!!!" Sam Adams stands up and pounds the gavel. "THIS MEETING CAN DO NO MORE TO SAVE THE COUNTRY."

OK, I may be a cornball, but I got goosebumps every time I read this quote in Johnny Tremain.

Larry Day's beautiful illustrations show life as it was in Colonial Boston and the book has plenty of non-fiction information like an errand boy's daily schedule, a glossary of terms, and a map of Colonial Boston which is fun to compare with a map of present day Boston.

As a fan of all things American Revolutionary, and Boston, this book will be hitting the library shelves in the fall.
Posted by Bill at 12:56 PM