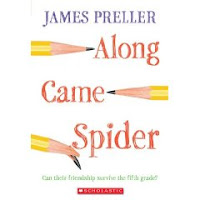 I've read a lot of books recently about girls trying to make sense of friendhsips and themselves, so it was a delightful surprise to find and read an advance review copy of a book that deals with boys trying to find where they belong in Along Came Spider, by James Preller (due out September 2008).

James Preller is probably most known for his Jigsaw Jones mystery series, but this book is much more character driven than the series.

This book has two main characters: Spider Stevens, a "typical" 5th grade boy, and Trey Cooper, Spider's neighbor and childhood friend. The story takes place during the boys' 5th grade year in Mrs. Wine's classroom. Trey appears to be mildly autistic, though that is not explicitly stated in the text. Instead, there is the scene where Trey realizes his pencils are not as sharp as he'd like them to be: "... if Trey boke a penil tip, or noticed that his supply of perfectly pointed pencils was running low, Trey had to respond - immediately, ASAP, pronto." And then when his teacher gets mad at him, he doesn't understand why, and tries to get her to smile by quoting statements off Mrs. Wine's Creating Smiles poster -- only none of the phrases he chooses are appropriate to the situation. Trey seems to have difficulty with social cues. Then, there is the scene where he gets in trouble at recess, and has to stand at the wall. For him, that is a relief from the hectic and loud playground. So, he stands facing the brick wall, contemplating each individual brick.

Up until fifth grade, none of Trey's behaviors or comments have bothered Spider; if anything, he has appreciated the wonderful brain Trey has and the way he can be so focused on a topic for a long period of time. They have been great friends. They play together at home, they walk to school together, they even do projects together. But in fifth grade, other kids start to pay attention to Spider, and he has an opportunity to be part of the "cool" boy group. But it will most likely mean Spider will have to leave Trey behind to be part of this other group.

The rest of the story deals with their separation as friends, and how they both grow a little as individuals. James Preller has also included a character that should make the 100 Cool Teachers in Children's Literature started by A Year of Reading. Her name is Ms. Lobel, the school librarian in the boys' school. She is one amazing lady!!!!!!!!! Her perceptiveness and kindness truly know no bounds, and her ability to see things the way Trey does is amazing!

The story concludes in a very satisfying, realistic way, but that's all I'm giving away because this is a book you need to read. I think that all adults in education, as well as students, need to read this book because it gives a thoughtful, insightful look into the minds of children like Trey. We all encounter them at sometime in our careers, and I hope, like the amazing Ms. Lobel, we can start to look at the "Treys" in our lives differently, instead of just looking at them as being different. There is a huge distinction in that mindset!

Thanks to James Preller for such a wonderful, thought-provoking story! And a huge thanks to Sally at Cover to Cover for allowing me to read and review this ARC.
Posted by Karen at 6:00 AM