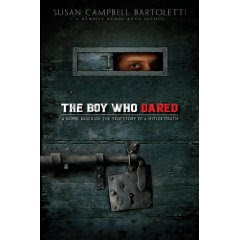 Based on the life of Helmuth Hubener, The Boy Who Dared takes you in from page one. Susan Campbell Bartoletti does an amazing job of switching from Helmut in prison, to flashbacks of what caused him to be there.

Helmuth was a teen age Mormon boy in Nazi Germany. He went through all of the steps to become a "good" Nazi, loyal to the party, memorizing all of the important Hitler propaganda, writing all of the right things on his school papers. He began to have problems with the whole thing when he watched his Jewish neighbors start to get mistreated and run out of the country. Then his religious convictions cause him to question the Nazi way. Helmuth begins to listen to the BBC illegally on a shortwave radio in his grandparent's home. He begins to publish and distribute pamphlets with the help of some teen age friends. As part of his Hitler Youth internship, he finds all of the banned books in a store room and reads some of them. They lead him to believe it is his moral responsibility to speak out against the party. All of this lands him in prison where he endures beatings and interrogations. I'm going to stop there, because I really don't want to ruin this book for anyone. Just let me say it again, it is INTENSE!

After the historical fiction portion of the novel, Susan Campbell includes photos of the actual Helmut, his family and friends, as well as current photos of the German prison in which he was incarcerated. She also includes the "what happened next" part that so many historical novels leave out. The reader is not left wondering, it's all here in the book.