Looking for Newbery - Day 10-With a Caldecott Thrown In 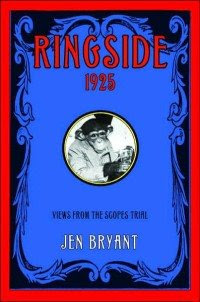 This countdown thing has sort of forced me to finish books that normally I would put aside because they are not age appropriate for our library. Ringside, 1925 is one of those books. Written in one of my favorite formats, free verse, by Jen Bryant, the book follows 9 characters as they witness the Scopes Trial in Dayton, Tennessee. I'll admit I know very little about the trial, just the basics, but that really didn't matter when reading this novel. Jen Bryant does an outstanding job of presenting a picture of life in 1925 Tennessee.

The story is told from the perspective of a teen age girl who wants more from life than keeping house and raising a family. We see the trial through the eyes of two teen age boys who are best friends who find themselves on opposite sides of the evolution argument. A poor African American boy who is self taught, intelligent and hard working watches the trial while he works setting up chairs and fans and tables, and dreams of life as a lawyer, pretty far fetched in 1925 Tennessee. All of these characters, in addition to the adults that inhabit Dayton, Tennessee bring the famous trial alive in a way that middle school readers will understand.

Although it's not written for the students I teach, the writing is well done, and, in my opinion, worthy of an award. I will not be disappointed if Rinsgide, 1925 is chosen.

And now for the thrown in Caldecott. Once again the kids at my school will be voting for their choices, and in compiling my list, I've run across some titles I had forgotten came out in 2008. One such title is Woolbur, one of the big hits in THE PIT last year. Here is my review.
Posted by Bill at 4:13 AM