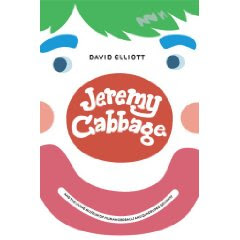 I'm not sure where to begin with this one. First the title, Jeremy Cabbage and the Living Museum of Human Oddballs and Quadruped Delights...whew...that's a mouthful! Written by David Elliott it earned one mention on the list compiled by Fuse #8 and I think that's about right. I've thought a lot about this one since I finished it and I'm still not sure how I feel about it. I haven't really come up with a way to summarize it due the fact that there's a lot going on throughout the story. I've finally settled on a sort of list, a list of things and characters in the book that need defining and by defining them maybe it will give you a bit of an understanding. Here goes...

1. Metropolis: No, not where Clark Kent and Lois Lane live, it's the dark, dirty place where the story takes place. Metropolis has no color or life to it thanks to the Baron Ignatius Fyodor Maximus von Strompie III the not too bright ruler who rules with an iron fist.

2. Baron Ignatius Fyodor Maximus von Strompie III: The not too bright ruler of Metropolis who rules with an iron fist and nobody likes.

3. Cloons: People who have cloondium felicitatum a condition which causes the nose to grow large and round and red. It also causes the feet to become extra long and wide and the complexion to take on various bright colors and the personality to "take a sudden turn to the outlandish." All of these symptoms tend to show themselves around the age of 10 or 11.

4. Pat pats: Short for Patriotic Patrol. The goon squad of the Baron. They go around collecting stray children, cloons and other entertainers, vagrants, people who generally annoy the Baron or his wife and throw them in the Choir Stall.

5. The Choir Stall: The miserable prison in the middle of Metropolis.

6. Jeremy Cabbage: The orphan who begins life with his beloved Polly and the Parrots living in the Licreeary hiding from the Pat pats and is later adopted 3 times, the last by a couple of cloons who finally show him what a real family is about.

7. Licreeary: Place closed by the Baron (much sadness) and all that's left of the sign says
lic ree ary (Public Free Library)

8. Bits and pieces: I made this one up. The story of Jeremy Cabbage is filled with little bits and pieces that keep coming back and connecting with another bit or piece until the end when all of the bits and pieces come together for a predictable, but happy ending.

The writing is pretty amazing the way that David Elliot keeps the story turning on itself and moving at the same time. While I wasn't enthralled with the book, I couldn't put it down either!