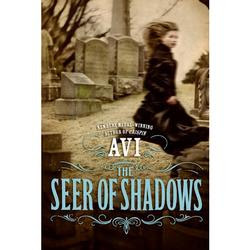 Kids love a great, creepy, suspenseful ghost story. Kids are going to love Seer of Shadows by Avi. I know people that love everything Avi writes, and I know people that don't like anything he writes. I'm kind of a hit or miss on Avi, I either really like them or can't finish them. This one...I couldn't put down.

1872 New York City and Horace is apprenticed to Mr. Middleditch, a somewhat down and out photographer. When an obviously wealthy client, Mrs. Fredrick von Macht, shows up for a portrait, the photographer plans a scam. When it is revealed that the client has a recently deceased daughter, Middleditch plans to use a double exposure to make the ghost of the daughter appear in the background. Horace struggles with the idea of cheating the client, and befriends her servant, an orphaned African American girl named Pegg. Pegg reveals a family secret concerning the true relationship between the deceased and Mrs. Fredrick von Macht and Horace is seriously torn. When it comes time to actually take the portrait, Horace is given a secret camera to take pictures of the paintings of the deceased to use for the double exposure and some surprising images develope! (pun intended)

Avi does a great job of keeping the suspense going and makes the story just creepy enough to give the reader chills down their spine. My favorite scene was the visit to the von Macht mauseleaum and the visitors he encounters there, AWESOME WRITING!

I actually talked to my fourth and fifth graders about this book today, and they are already asking to reserve it before I've even bought a copy. I have a feeling this one will be flying off the shelves in no time.

Email ThisBlogThis!Share to TwitterShare to FacebookShare to Pinterest
Labels: avi, looking for newbery, seer of shadows