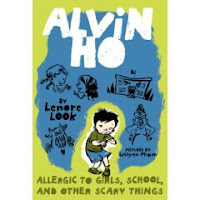 Alvin Ho: Allergic to Girls, School, and Other Scary Things by Lenore Look is a hoot to read! I am currently reading this book aloud to my class, and they are thoroughly enjoying it. One student commented on the very first day that he thought Alvin Ho was a character very similar to Junie B. Jones -- a little young and a lot needy. There was much conversation about his statement, but I would say that Alvin Ho's character, and the characters that surround him, are much more clearly developed than the Junie B. Jones' characters (and I love Junie!!).

Alvin is a second grader who loves superheros and has even morphed into a superhero himself at times -- Firecracker Man. But Alvin is afraid of a huge laundry list of things, and my students were quick to pick up on the idea that he probably becomes a superhero so that he can feel brave at times, since he is so scared most of the time.

The supporting characters -- his family ( Mom, Dad, Calvin - brother, Anibelly - sister, and Lucy - dog) and his friends (specifically Flea, Pinky, and Jules) are all well developed, and each has an important part in the story.

The whole book is fun, and written in first person. One of my favorite chapters is the first, where Alvin introduces himself. There are six things to know about him: 1) his name is Alvin Ho and he is scared of many things, 2) he loves things that explode, 3) the names of his dog and other family members (see above paragraph), 4) he loves superheros, 5) "a long time ago", before he went to school, he was a superhero - Firecracker Man, and 6) he has never spoken a word in school. All these pieces of information help "drive" the rest of the book.

For a book that is written in such a humorous way, I was caught off-guard by the great language Look uses -- she effectively includes many similes, metaphors, alliteration, and onomatopoeia within the context of her story. I also love that the characters in the story have ethnicity, both in words and in pictures.

Alvin Ho actually made 4 Mock Newbery lists, which surprised me a little because it didn't seem like the type of book that might win a Newbery. After reading it, I can now better understand what those 4 groups were thinking when they included this book in their top picks.

The best part of this book is how kid-friendly it is -- lots of children will connect with Alvin. Even if Alvin Ho: Allergic to Girls, School, and Other Scary Things doesn't win a Newbery, it is definitely a book that should be in classroom libraries -- if my students are any indication, kids will love this book!! It looks like this will be a series -- the next book is due out in late June!
Posted by Karen at 3:00 AM