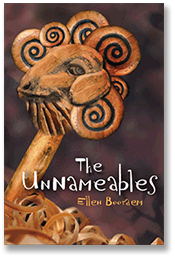 Ellen Booraem's new fantasy, The Unnameables, has Grand Discussion written all over it! It only got one mention on THE LIST, but that may be due to the fact that it was only released in October.

A new society is formed on an island and everyone has to switch their last name to reflect what they do, for example, Weaver, Potter, Carpenter, etc. The society lives by The Book, an ancient book of advice and wisdom written by Capability C. Craft in 1680 and creates only things that are deemed useful and can be named. Anything else is seen as evil and can be cause for removal from the island if the council decides. Children go through "transition" at age 14 or so and at that point they are given the last name that reflects their craft.

Medford Runyuin is an orphan that ends up on the island as a baby after his parent's boat wrecks on the shoals. He is taken in by Boyce Carver and his wife. Medford is trained in the family craft, and at age 10 begins to make unnameable objects, artistic carvings of things found in nature, and busts of other islanders. He knows they are evil, and hides them under his bed, but can't bring himself to destroy them as he knows he should. Medford is friends with Prudy Carpenter who dreams of following her father's footsteps to become a carpenter. However, Deemer Learned, the teacher has other plans, and after sending his own daughter from the island under questionable circumstances, he chooses Prudy to be trained as a teacher. It takes the appearance of a mysterious Goatman creature to wake up the citizens and bring the truth out of the corrupt leaders.

As in The Giver and City of Ember, the "perfect" society is not so perfect. Power hungry leaders keep secrets from the citizens, hide their own faults, and pass judgement quickly on others. Unfortunately for all of us educators, the bad guy in this one is Deemer Learned, the teacher.

I was fascinated by the idea of this book. Ellen Booraem does a great job of keeping the fantasy believable and moving. There are so many societal issues involved that the book will lead to some great group discussion about right and wrong, the need for power, and life choices.

More reviews:
Kidsreads
GregLSBlog
Children's Books for Parents and Teachers
Posted by Bill at 4:56 AM