11 Birthdays is a Treat 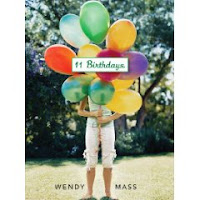 Well, it's been so long since I've written a post about a book, I'm afraid I might have forgotten what to do. However, if I was going to end my work-induced sabbatical from reviewing, 11 Birthdays is the perfect "come-back" book!

I got this book as an ARC way back in September. I jumped at the opportunity to read 11 Birthdays because it is written by an author (Wendy Mass) who wrote another book I truly enjoyed -- Jeremy Fink and the Meaning of Life.

Right away, I noticed a connection between the two texts -- the main characters in both books are a boy and a girl. And better yet, they are a rare thing for children who are ages 10 and 11 --they are good friends.

That is, Amanda and Leo have been inseparable friends for the past ten years. They were born in the same hospital on the same day, and ever since that time, they celebrate each of their birthdays together with some sort of themed party.

Things went off-track when they were celebrating their tenth birthday together, and Amanda happened to overhear Leo telling a group of boys, who were questioning him about why he had his birthday party with a girl, that he only did it because he felt sorry for Amanda. Amanda was devastated by this news, and promptly left the party, never to talk to Leo at all during the next year.

Fast forward to the day of their respective eleventh birthdays. They are each having their own separate birthday party for the first time ever -- Amanda is having a costume party, and Leo is having a hypnotist, famous football player, and a band at his party. Leo's is the party everyone at school is talking about.

For Amanda (the narrator), the entire day goes badly. She has to take the bus to school, she forgets her lunch, her best friend, Stephanie, doesn't see her on the bus and sits with someone else, her locker door won't open, there is a pop quiz in her first class, she has to eat leftovers from other people's lunches at school, she tries out for the gymnastics team after school, but freezes and can't perform her back handspring, her mom is fired from her job, the Dorothy costume her mom rented for her birthday party is too tight and the red shoes pinch her feet and give her blisters, lots of kids just dropped presents off but didn't stay because they went to Leo's birthday instead, and even Stephanie, the best friend, abandons her to go to Leo's after a while. All in all, a dismal birthday, and Amanda can't wait to go to sleep and wake up to a brand new day.

And this is where things get interesting in a "Groundhog Day" kind of way (though for me, these kids are much more enjoyable than Bill Murray). The next morning Amanda wakes up to find out it is the day of her 11th birthday again. Imagine having to relive a day as miserable as her "first" eleventh birthday was. Amanda is in disbelief at first, but after many attempts at trying to prove this is some elaborate practical joke her family is playing on her, she is finally resigned to re-doing the day all over again. She finally gets to the end of the day, and just dearly hopes that tomorrow will be a NEW day.

Well, as I'm sure you can guess, that doesn't happen. Though I felt badly for Amanda, each 11th birthday replay becomes a little different and much more interesting, which makes it fun for the reader. The plot really starts to move along when we realize Amanda is not the only one reliving her birthday -- Leo is also.

I don't want to give away much more, but the plotting to try to break the birthday replay cycle, the spells that got them into this mess in the first place, and the gradual rebuilding of a life-long friendship are great reasons to read 11 Birthdays. This was a delightful read for me. It's due out January 1, 2009 -- be sure to put it on your "To Be Read" list!!!
Posted by Karen at 4:04 AM