Those Darn Squirrels Are Going to Invade THE PIT! 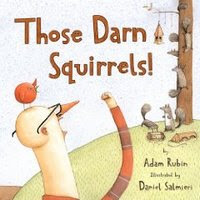 I start with a new rotation tomorrow, and Those Darn Squirrels will be attacking THE PIT like the squirrels in Adam Rubin's book attack cranky Old Man Fookwire.

Old Man Fookwire hates everything including pie and puppies. The one thing he loves is birds. When he hangs a bunch of feeders in his back yard, the squirrels begin to steal the food. Old Man Fookwire goes to great lengths to protect the feeders from the clever squirrels who can build a bed out of a bunch of leaves, a box kite out of twigs dirt and squirrel spit and are excellent at math.

When Old Man Fookwire designs an elaborate Rube Goldbergesque system of protection, the squirrels make a plan. I love Daniel Salmieri's illustrations in this book, they are hilarious, but the one of the squirrels planning their attack is my favorite. They are gathered around a table with a drawing of their plan of attack, mugs of frothy beverages and salty vinegar chips. A couple of helmets on and it reminds me of dogs playing poker, if only it were drawn black velvet, the image would be complete!

In the end, the squirrels take pity on Old Man Fookwire when they see him all alone eating his favorite snack of cottage cheese and pepper. They pay him back for all of the food they have
stolen with coins from their extensive collection of stuff. Then as a sign of friendship, they dress up like birds to give the old man something to paint.

This book is going to be a lot of fun to read out loud as Old Man Fookwire's voice is ringing in my head already, I'm pretty good at being a grumpy old man. The pictures will make the kids laugh and, in the words of Old Man Fookwire, "Great googley-moogley, those darn squirrels are funny!"

Another review at PlanetEsme.
Posted by Bill at 3:54 PM