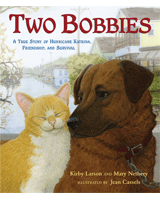 Kirby Larson wrote one of my favorite Newbery Honor books, Hattie Big Sky. When I saw that she had a non-fiction picture book out, I had to read it. I wasn't disappointed.

A dog and a cat, both with no tails, were left behind when their owners had to evacuate. The two stuck together through the floods of contaminated water, lack of food, vicious dogs, and a number of other scary situations. When they were finally rescued by a construction worker named Rich, Bobbi was still protective of Bob Cat, not allowing anyone near her. Eventually Rich takes the two friends to a temporary shelter set up by Best Friends Animal Society, an appropriate name considering these two survivors. However, both animals are nervous when separated. Bob Cat paces in her pen, and Bobbi howled all night, keeping the rest of the animals and human workers awake all night. The two are reunited and everything settles down. To add to the amazing part of the two, it is discovered that Bob Cat is blind and Bobbi had served as her "guide dog" through their entire ordeal. The animals are featured on the Anderson Cooper 360 show and hundreds volunteered to adopt them, but only one made the long journey to meet them face to...uh muzzle. An immediate bond was formed and the Bobbies have a new home.

It's a touching story that will elicit lots of ooohs and aaahs when read out loud. The illustrations by Jean Cassels make the two heroes come alive and compliment the story by Kirby Larson and partner Mary Nethery.