From Alice to Zen and Everyone in Between 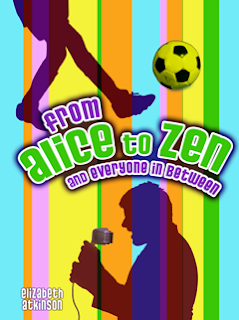 Alice Bunt is a tom boy who moves from the city life of Boston, to the suburbs and a big fancy mansion of a house built on a cul de sac that use to have trees and other natural things, called Hemlock Trail. She has a cat named Yaz after her favorite Red Sox player, and a dog named Einstein, supposedly the smartest pug puppy ever. She would rather play soccer and not worry about her clothes as long as she's comfortable. Her dad stays at home while her mom works in the city as the vice president of a large publishing company.

Zenithal Stevie Wonder Malinowski, Zen for short, is the boy who lives in the run down house just outside of the new development. He calls the street Alice lives on Hemlockless Trail since all of the trees have been removed. Zen would rather read fashion magazines, than dress stylishly or play any sport. Zen is the overweight outcast at school who lives with his grandma and decides he will give Alice advice on fashion, friendship, and walking so she will be popular at middle school.

The two have a like/hate relationship that is interesting to read. Zen keeps insisting that Alice follow his advice, and Alice keeps doing it, reluctantly. When school finally opens, Zen has created a middle school diva that quickly gets into the good graces of the popular crowd that Zen has selected, even though it is completely against everything Alice likes or believes. She struggles with the fact that the girls Zen has picked as her friends treat him horribly, and she doesn't do anything to stop them, for fear of losing them as "friends." The interesting thing is, Alice never feels like they are friends and wishes she could make friends with the shy girl, Rebecca, who seems more like her.

After a falling out with the beautiful people, Zen's hidden musical talents are revealed when Alice and Rebecca attend his new age church and hears him sing a solo. The girls are moved to talk him into singing in the school talent show with the hope that it will improve his standing in the school. Although he doesn't want to, Zen performs, and true to middle school form, finishes second to the popular kids even though everyone admits he is way more talented. In the end, it does help him gain a certain level of acceptance at the school, but, partly by choice, Zen will always be a bit on the outside looking in.

I like this book even though it was one that I considered abandoning several times. I was compelled to keep reading to find out what was going to happen. I have to admit, Elizabeth Atkinson has created Zen in such a way that at times I felt awkward reading about him. He was that kid that is laughed about and felt sorry for at the same time. In the end, I liked him a lot. His willingness to be different and not care so much what others thought impressed me enough that I couldn't give up on him. I liked that Atkinson didn't let him give in and conform to the middle school pressure. Zen continued to express himself in his own unique way to the end. I'll be recommending this one to fifth graders getting ready to fight their own battles to find their place in middle school.

Another review here.
Posted by Bill at 9:24 PM