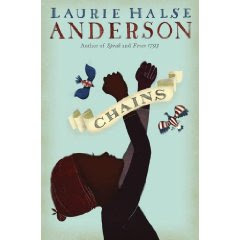 I'm a huge fan of the book Fever: 1793 and recommend it to any student that loves historical fiction. It has to be one of my all time favorite novels for upper grades. When I saw that Laurie Halse Anderson had another historical fiction novel getting all sorts of attention I had to read it.

Chains is about Isabel, a slave girl in Rhode Island who, instead of getting freedom upon her owner's death, she gets sold to a ruthless couple from New York. The mistress of the house has some serious anger issues and believes in strong discipline for her slaves and to make matters worse, Isabel's handicapped sister is sent away. Isabel meets up with a freed slave that fights for the American cause and he encourages her to spy on her new master who is identified as one of the leading Loyalists in New York.

Laurie Halse Anderson does an interesting job of taking the reader back and forth between what Isabel should do. She is torn between working for the American sympathizers for freedom or working for the British supporters for freedom. Both sides of the dilemma are presented in a believable way and I found myself changing my mind about what would happen at every turn.

I wasn't sure about this one as I was reading it, I thought it moved a little slow, but in looking back I realize now that the author does such a great job of developing a plot with so many twists and turns that it couldn't move any faster and be this good. Before you start, be warned it's just the first novel in the saga of Isabel. I wasn't aware of this when I started so I must admit I was a bit disappointed when the story didn't finish.

Interestingly, I saw a couple of reviews from middle school students who really enjoyed the book. So obviously there are kids out there who will enjoy this book. In my opinion it is for more of a middle school audience, so I'll continue to put Fever: 1793 in my students' hands.

Chains got 7 mentions according to the list at Fuse #8 the most of any title.
Posted by Bill at 5:22 AM