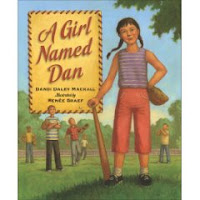 This picture book, A Girl Named Dan, by Dandi Daley Mackall, and illustrated by Renee Graef, was actually a reread for me. I'm not sure why I didn't blog about it the first time, but in a historic year when one woman campaigned to be President, and now, another woman could possibly be a heartbeat from the Presidency, this book reminded me of how far women have come, and how much all of this can show young girls nowadays about reaching for what you want. The sky is the limit whether you are male or female, and regardless of the color of your skin.

Based on the author's note at the beginning of A Girl Named Dan, and the About the Author info on the back jacketflap, one would assume this story is nonfiction and based upon the author's life.

Dandi was a young girl who loved the Kansas City A's baseball team and loved to play ball herself. At recess, she was the only girl who wanted to have outside recess. She would play baseball with the boys, and was very good at it:

"I may not have been a fence-buster, but I could 'hit 'em where they ain't' every time. And I had good leather in the field, with speed for showestring catches."

But there came a time when the boys told Dandi she couldn't play anymore; it would be "boys only" from now on. That meant she had to do things other girls did: talk about movie stars and swing on the swings -- all things she hated.

But then, an opportunity of a lifetime presented itself. There was going to be an essay contest to get batboys for the Kansas City A's. Dandi was so excited, until a boy pointed out to her that in the rules, it said "For Boys Only". That didn't stop her. She entered an essay (beautifully written) under the name of Dan Daley, and she won!!

Unfortunately, when the men representing the team came to her door and found out she was a girl, they took her winning away.

The rest of the story deals with how Dandi handles her disappointment in a way that all students will be able to relate to.

So, I like this book because it shows a strong female character, it dabbles with injustice, it has some beautiful language throughout, and I especially love that the winning essay was the start of a lifetime of writing for this author. As you can see, there are many reasons to share this book with children. A Girl Named Dan can point out the possibilities for all of us!
Posted by Karen at 4:15 PM