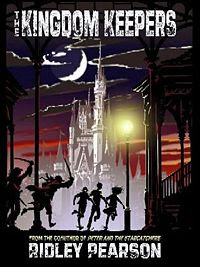 In the effort to get my eighth grade son to read this summer I told him I wanted to read a book with him. After two false starts, books that I had read and thought he would enjoy, I happened upon Ridley Pearson's Kingdom Keepers. I found these two titles while looking at an advance copy of Science Fair by Pearson and Dave Barry that I reviewed here.

The Kingdom Keepers takes place in Disney World after dark, after closing. It seems that the main character Finn Whitman has been chosen to be a Disney Host Interactive or DHI, a holographic image of himself that will lead visitors to the park around. Cool science fiction stuff that I don't really understand but it didn't matter! As a fan of Disney, I can almost believe they are currently working on this technology.

Due a glitch in the system created by the villains of Disney, Finn and the other DHI kids are transported to the park every time they fall asleep. Finn is chosen as the leader by a mysterious old man who lives above the fire station on Main Street U.S.A. named Wayne. Wayne explains that the villains of the park are beginning to take over and indeed, Finn finds himself in a laser battle with the Pirates of the Caribbean. The lasers are being fired from the cars from the Buzz Lightyear ride and in the morning, Finn has the burn marks to prove it. Extremely fun stuff for anyone who has visited Disney as Pearson writes with great detail about the park and the various rides and attractions. My son and I both enjoyed the descriptions and had several conversations as to what was real and what was fiction.

The group of DHIs must solve the riddle of the Stonecutter's Quill, a fable shared by Walt himself that gave clues on where the real power of the park lies. In the course of solving it, the kids run into the evil queen from Sleeping Beauty, Maleficent who freezes the air whenever she is around and a mysterious pair of girls Amanda and Jez that add to the suspense and intrigue.

We really liked this book, and I was just happy to find a book we could finish this summer. All fans of Disney will love it because the author does such a great job of taking you to the park. Non fans of Disney will like it for the mystery, adventure, humor and suspense. I purchased this for our library and will be sharing it with good third grade readers and up.

Other reviews at Big A Little A and Kids Reads.
Posted by Bill at 8:34 AM