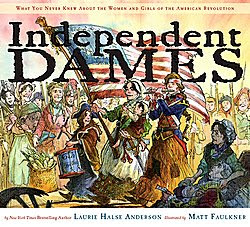 Fifth grade history teachers, you are going to love this book! One of the tough things about some of the history standards we had to teach was finding appropriate sources. We had to teach about the women's role in the American Revolution, and beyond Molly Pitcher, which I learned was a legend from this book, it was tough to find others.

Laurie Halse Anderson, the author of Fever, another of my favorite historical fiction titles, has this new book illustrated by Matt Faulkner. So much information in so few pages. Each page spread discusses the different roles played by women in the fight for independence. Typical roles such as doing laundry, mending and sewing uniforms and non typical roles such as spying and posing as men and fighting. The author provides plenty of detailed examples of each and the illustrator provides colorful drawings with speech bubble depicting the "dames" in action. Kids are going to love the format, and I guarantee the teachers will learn right along with them.

Anderson includes the usual, Abigail Adams, Phillis Wheatley, and Sybil Ludington. Also included are the unfamiliar Ann Bailey who enlisted under the name Samuel Gay in Massachusetts and reached the rank of corporal.

Who knew that at age 9 Susan Boudinot had her own "tea party" by dumping a cup of British tea out the window of the Royal Governor of New Jersey's mansion, and she didn't even hide behind an Mohawk Indian disguise!

Polly Cooper, an Oneida woman took forty warriors and delivered 600 baskets of food to the troops at Valley Forge and stayed behind to serve as a cook for General Washington, refusing payment.

These Independent Dames were heroes and this book is ABSOLUTELY a valuable resource to elementary history teachers.

More reviews at The Reading Zone, I.N.K., and Young Readers.
Posted by Bill at 7:05 AM