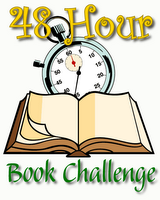 So we drove for about 9 hours today giving me plenty of time to read, but making blogging nearly impossible. We have arrived safely in a hotel in Florence, SC, just a little over an hour from the beach and I finally have time to wrap up my 48 hours. Although I didn't get the chance to read nearly as much as I would have liked, I did complete 4 books, one of them 500 pages so for Mary Lee's sake, I'm counting that as three books, bringing my total monetary donation to $20 which doesn't sound like much, but when combined with all of the other Central Ohio Bloggers donations it should look pretty good.

My final read was AWESOME! I'm a big fan of the book Al Capone Does My Shirts by Gennifer Choldenko, in fact, we used it in one of our first Grand Discussions. Just to catch you up, Moose Flannery lives on Alcatraz during the 1930s because his father works as a guard on the island. Strange but true, the guard's families actually lived on the island with the prisoners and everything. Moose's sister Natalie is autistic even though that wasn't a diagnosis in the 1930s and the famil

y struggles with her outbursts especially Moose's mom.. To make a great book shorter, Natalie gets into school for special kids and the reader and Moose are left to wonder if Alcatraz's most famous resident, Al Capone, had something to do with it. In the very end, Moose finds a note in his shirt pocket with the simple word "Done." He suspects Capone put it there and that it must mean that he had something to do with Natalie's entry into the school. Great book! It really left me wanting more.

Imagine my surprise on Saturday when Sally, the owner of Cover to Cover, handed me an ARC of Al Capone Shines My Shoes! I had no idea there would be follow up book but I was thrilled to get my hands on a copy of it, so thank you Sally!

This book picks just shortly after Natalie enters school and things in the Flannery household are much calmer. Moose's mom is much more relaxed and his father seems to have a little extra spring in his step. They all miss Natalie, but in the 1930s when autism wasn't understood and even thought to be contagious by some, it m

ust have been a bit of relief to the family.

Moose receives another mysterious note asking him to get yellow roses for Al Capone's wife Mae who will visit the island. He breaks into hives from the worry of how he will pull this off without getting caught and putting his father's job in jeopardy.

All of the characters are back and Gennifer Choldenko spends a little more time developing the relationships between the kids including Piper, Jimmy, Scout, Annie and Moose. When Natalie comes back for a visit she is carrying a bar spreader in her suitcase which the kids find and suspect all sorts of plots. Of course Natalie has no idea what it is or what it's for but it comes out that she has had contact with convict 105 from the first book and he placed it in her suitcase.

Choldenko does a fantastic job of portraying Natalie and the improvement she has made since she has been away. Most likely because of how close she is to the issue since she grew up with an autistic sister. I love the way she portrays the kids realistically. Moose continues to try to please everyone and ends up angering some. Annie is the tomboy baseball player who has a crush on Moose but is too proud to show it. Jimmy continues to try to learn baseball so Moose will like him better, but still loves science and more thoughtful things. And then there's Piper, the Warden's daughter who uses her position to her advantage and doesn't care what damage it does to others. Piper is a classic beautiful mean girl who Moose can't stay away from. I love that in the end, even though the whole cast has to work together to thwart an escape, Piper never changes. Gennifer's realistic characters are so well done and believable that I don't get tired of reading about them.

The book is scheduled for release in September of 2009. I may recommend it to those that have already read the first Al Capone book, but it is for a more mature audience then most 5th graders. As Karen said in her earlier post, sometimes the second books disappoint, but not in this case, I liked it just as much as the first.
Posted by Bill at 9:32 PM