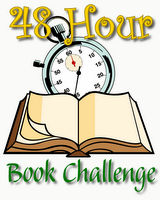 One of my students got me Scat by Carl Hiaasen as an end of year present. I decided that it would be my first read of the 48 Hour Challenge.

Much like Hiaasen's book, Hoot, this book is about preserving the nature in Florida. What is a little more unique in Scat is that both grown-ups and kids join forces against the bad guys -- in this case, an oil drilling company.

The cast of good guys have impressive credentials:

The plot twists aren't totally surprising, but they are enjoyable. Hiaasen is at his best when describing the almost extinct panther -- beautiful language.

Great first read. Now, it's off to bed for me, and up bright and early to meet the Central Ohio bloggers for breakfast and a trip to Cover to Cover.
Posted by Karen at 11:31 PM