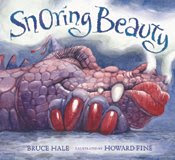 Just look at that cover!! I knew before I even opened it, this book was going to be fun to read aloud in THE PIT! Bruce Hale has created possibly my favorite version of Sleeping Beauty called Snoring Beauty.

The twist in this version is that the fairy that changes the curse,Tintinnitus, is hard of hearing and instead of hearing, "She will be run over by a pie wagon and die!" Tintinnitus hears, "She'll turn into a dragon and fly?"

She then switches the curse to a sleeping dragon that can only be awakened by a quince. When the curse comes true, the kingdom looks all over for someone who can awaken the snoring dragon with a quince, an aromatic, many-seeded, apple fruit that is only edible when cooked. Yeah, I looked it up!

The story is hilarious with fairies named Blexus, Beebo, Umpudine and Fleabitis who likes to show is polka dotted boxers. My favorite fairy is Fred. Fred looks nothing like a fairy, more like an old hairy guy in a sleeveless tunic eating a turkey leg. Okay, he isn't really a fairy, but nobody has the heart to tell him. As the book says, they are "seven of the funkiest fairies you have ever seen."

The illustrations are colorful and compliment the story perfectly. I found myself going back through after the first read, just to study the pictures. Howard Fine hides things that will only be noticed with a keen eye. It makes this book very appealing to all ages.

I can already hear the voices in my head that will come from this story. I can't wait to share it in THE PIT!
Posted by Bill at 7:56 AM