Allie Finkle's Rules for Girls is a Great New Series! 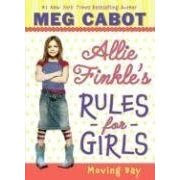 Allie Finkle's Rules for Girls: Moving Day is the second in my posts about fun books to put in the hands of children before the end of the year, or for summer reading.

Meg Cabot, famous for her Princess Diaries series, has now found a voice for the younger girl. Allie Finkle is the main character in a new series Cabot is starting. Allie is nine years old and a fourth grader, and her parents have just informed her they're moving. Moving can be stressful, but Allie decides to take control, and make sure they never have to leave the house, the school, and the friends she loves so much. In fact, there are many ways Allie tries to impede the moving process. Sharing them might ruin the story, but let me say, she is quite relentless in her pursuit of not moving.

Since Cabot is starting a new series, this first book does a wonderful job helping us become acquainted with the settings that will soon be familiar to readers as they read other books in the series. We learn about Allie’s old house (well, really a new, updated suburban house) and old school (ok, really a fairly new school, complete with air-conditioning). Then, after the move, we transition to Allie’s new house (well, a very old Victorian home in need of much repair and redecorating) and her new school (ok you guessed it – an old school, that doesn’t have air-conditioning). We are introduced to two of the family’s favorite places to eat – Lung Chung (where Allie does something that may allow her to never go back, but I just know Meg Cabot won’t allow that to happen) and Dairy Queen (conveniently located to the new house).

Then, there are the characters. First of all, there is Allie’s family: Mom, Dad, Mark and Kevin (both younger brothers). Though we don’t meet him a lot in this book, Allie’s Uncle Jay is a character I hope appears more often in future books – he’s the “quirky” uncle. Then, there are Allie’s school friends (I use that word generically here). There is Mary Kate (her always crying best friend), Brittany (can turn on the charm with adults, but isn’t always nice to peers), Courtney (Brittany’s best friend), and Scott Stamphley (self-appointed annoyer of girls). At Allie’s new house, the girl next door is her exact age and grade – her name is Erica and she is a whiz at yelling, talking loud, having a great imagination, and gymnastics. I look forward to learning more about her in future books. Erica also has an older brother in middle school and an older sister in high school. John, the brother, plays a practical joke on Allie than becomes an integral part of her reluctance to move to the new house, much to her parents’ chagrin.

“That’s why I need the rules. Friendship is so COMPLICATED.” These 2 sentences reflect Allie’s reasons for needing the rules for girls. But her rules aren’t just about friendship; they cover the spectrum from pets to family to skateboarding without a helmet to celebrities. The book is full of rules Allie needs to navigate her way through the pitfalls of being a 9 year old, fourth grade girl. In fact, each chapter title is one of Allie’s rules for girls. But don’t let the fact that there are only sixteen chapters delude you into thinking Allie has only 16 rules to live by… quite the contrary. Embedded within each chapter, the reader can find even more rules. Allie has rules for everything. And just in case you’re having a difficult time keeping track of all the rules, Meg Cabot cleverly includes ALL of Allie’s rules in a list on the last 3 pages of the book.

This new series will be finding a home in my classroom this May. As series books tend to do, it will help support those readers who need to use their background knowledge to make sense of the text. Girls around this age can all relate to the personalities, the issues, and the basic question – where do I fit in? Then, as the series progresses, they will be supported by already knowing characters and settings – they can now focus on the story line.

Allie Finkle is a unique girl, who can’t be pigeonholed into a category. Because of that, she reminds me of other favorite characters – Junie B. Jones, Clementine, and Moxie Maxwell. If you know a child that likes a character that marches to their own drummer, Meg Cabot’s new series, Allie Finkle’s Rules for Girls is a must read to put into their hands!