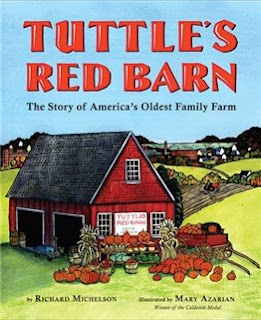 As a lover of U.S. History, the thing I miss most about teaching 5th grade, Tuttle's Red Barn really gave me heart palpitations! Written by Richard Michelson, it follows the time line of America's oldest family farm, started in the 1600s by the first generation, John Tuttle.

The book traces the history of the Tuttle farm from the 1600s to the present day. Using generations to identify the time periods, the story traces the changes the farm goes through in the as it passes from father to son. The farm experiences many of America's historic times firsthand. It starts as a colonial self sufficient farm in the 1600s, survives battle during Indian Wars, the American Revolution and becomes a stop on the Underground Railroad.

The farm undergoes many changes to survive as a business for nearly 400 years, as a maple syrup farm, using the first cider mill in Dover, New Hampshire, the town's first greenhouse, and a farm market that exists still today.

Not only can the history of a family run farm and business be followed, but also the cultural changes in our country. The book talks about the change from home grown to big grocery stores and farms taking over. How we experienced a "get back to the land" change in the 1960s and how one generation went away to college, but yearned to get back to the farm. Another interesting observation about cultural change is the names of the Tuttle's through the ages. It's not until the 7th generation in the mid 1800s that a Tuttle man has a middle name, a reflection of the times.

It is also interesting to note that no females inherit the farm through 12 generations. One review I read saw this as a problem, however, without more background information, I think it's impossible to be too judgmental on this issue. Perhaps there were no females interested in taking over, perhaps their spouses didn't come from the farming tradition, perhaps no females survived long enough to take the farm over, so many unanswered questions and possibilities to make this an issue in my opinion.

In any event this is a wonderful book about the American tradition that is the family owned farm. Richard Michelson does a masterful job of telling the Tuttle's story, and Caldecott winner Mary Azarian's illustrations are beautiful. This book can be used in so many ways in any classroom at any grade level.

To visit the farm on line, go here.

For the Nonfiction roundup go to Picture Book of the Day.
Posted by Bill at 7:05 AM