All Aboard the Freedom Train 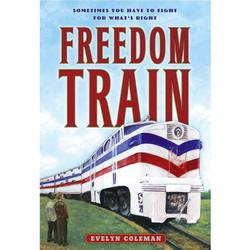 Finding good historical fiction for third graders is not an easy thing to do. Evelyn Coleman has created just that with Freedom Train. Clyde Thomason's older brother is chosen to be a guard on the 1947 Freedom Train, an actual train that crossed the country to show off many of the most important documents in United States history. The problem is, because of this, Clyde has been chosen to recite the Freedom Pledge in front of a huge crowd when the train visits Atlanta. Clyde is not comfortable speaking in front of his own class, let alone the thousands that will turn out for the big event. In addition to this pressure, the school bully, Phillip Granger, has selected Clyde to be his target. This is made doubly difficult because the Phillip's father is the boss of the cotton plant where all of the parents work, and he holds it over the other students' heads at every opportunity. Phillip is Clyde's replacement for the Freedom Train ceremonies.

On the way home from school one day, Phillip and his goons decide to beat up Clyde. They catch them alone, and Clyde gets whacked in the head with a board. As he lays unconscious on the ground, an African American boy and his doctor father come to his rescue. Add the pressure of keeping this secret from his father, and Clyde is a real mess.

Coleman does a great job of creating the pressure that Clyde must feel with all of his mixed emotions. She portrays a poor white southern family perfectly. A mother who recently went to work during the war, and stayed. A proud father who is a bit put out that his wife has to work to help support the family, and is willing to follow a group of men to harass the African American doctor's family to protect his job.

Other strong characters include an open minded principal that doesn't believe in corporal punishment, and is friends with African Americans in the community, and the war hero older brother whose letters home enlighten Clyde about equality among the races.

All in all this short historical fiction novel does an excellent job of portraying the mood of the south in 1947. Although the topic can be heavy, the author lightens it with enough humor that readers from third grade up will enjoy it.
Posted by Bill at 6:42 AM