Timmy Failure Will Be a HUGE Success! 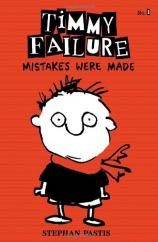 As usual, my friend Beth at Cover to Cover was right on the money with her suggestion of Timmy Failure Mistakes Were Made by Stephen Pastis.  I will be purchasing it on my next trip to my favorite bookstore and I know it will not stay on the shelves in our library.

Much like Wimpy Kid or Big Nate, Timmy Failure is done in a journal style including drawings and handwritten notes throughout.  Timmy is an interesting kid who has the unfortunate last name of Failure.  He lives with his mom and starts his own detective agency from his mother's closet.  His sidekick and business partner is a polar bear named Total.  It is unclear whether Total is real or imaginary, I suppose that will be up to the individual reader to decide.

Timmy's detective agency is called Failure, Inc. and the book is the published history of Timmy's life as a detective.  He proves to be a little short sighted in his investigations, keeping the reader informed of all of his discoveries with excerpts from his detective notebook.  For example when he is asked to investigate a classmate's missing Halloween candy and sees the little brother, Gabe, covered in chocolate with a pile of candy wrappers surrounding him, he writes, "Gabe not tidy."

Timmy's adventures continue and his gift for missing the obvious answers to the mysteries he wants to solve provide a lot of reasons for laughing out loud.  There is also the other story that sneaks in occasionally.  The story of Timmy, the son of a single mom who is having a little difficulty making it.  They move out of their house into a one bedroom apartment and Timmy deals with it in various ways including denial, and doing poorly in school.  All of it is handled in a way that kids will understand, but not be put off by.

Stephen Pastis is the creator of the comic Pearls Before Swine which most elementary students won't be familiar with, but the humor and story telling in Timmy Failure will appeal to elementary readers in grades 2 and up.  I think it certainly has a wider age appeal then Wimpy Kid and will be a very popular series.
Posted by Bill at 10:34 AM