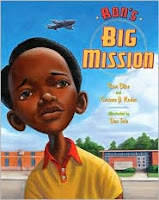 Ron's Big Mission by Rose Blue and Corinne J. Naden is the story of Ron McNair, a black man who grew up to be an astronaut, and unfortunately died on January 28, 1986, when the Challenger exploded.

But this story is not about Ron McNair, the astronaut. It is far more about Ron McNair, the brave young boy who changed things forever in his town of Lake City, South Carolina. Ron was a youth that liked to frequent the town's public library. He would read everything he could get his hands on that dealt with aviation. But Ron was unlike most patrons of his public library. Because his skin was black, he was not allowed to have a library card and check out books from the library. His reading all had to take place at the library; not in the comfort of his own home.

One day Ron made a stand... literally. He gathered a pile of books on aviation, took them to the front desk, and asked to check them out. When no one would respond to his request, he jumped up on the circulation desk, stood there, and announced quietly to all within earshot that he would like to check out the books. People reminded him that he was black and only white people could check out books. He stood his ground, and eventually the Lake City police and his mother were called.

Despite many people telling him it was impossible to check out books, he stayed determined. He asked why he shouldn't be allowed to check out books like all the other students. In the end, we see Ron walk out of the library with a library card and a pile of books that were important to him; important enough for him to stick up for what he believed was right.

In the Author's Note at the end, the authors say, "This story is a fictionalized account of a real incident in Ron McNair's life." That being said, based on the interviews the authors did, I'm inclined to believe that this version is close to what actually happened.

The illustrator for Ron's Big Mission was Don Tate. The illustrations are reminiscent of some of Kadir Nelson's work, with the oversized heads and the large, expressive eyes.

Watching the Challenger explode is one of those tragedies that I'll never forget -- the disbelief something like that could happen. Ron McNair, along with his crewmates, is truly remembered as a hero. Ron's Big Mission is a little misleading -- it would appear that Ron McNair was a hero long before he ever became an astronaut. Being the person who paved the way for black children and adults in Lake City, South Carolina, to get their own library cards; taking a stand for what he believed was right -- that is when he first became a hero.
Posted by Karen at 12:01 AM