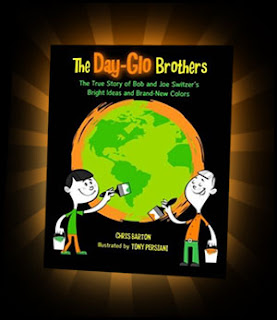 The Day-Glo Brothers: The True Story of Bob and Joe Switzer's Bright Ideas and Brand-New Colors by Chris Barton was a surprise for me. When I saw it on the list of nominees, I thought, REALLY!? I mean how much of a story could there be behind the neon colors that we all grew up using to make all of our school projects POP! Turns out, it's a pretty interesting story of experiments and accidental discoveries.

The Switzer brothers were opposites in many ways, Bob, the older brother, was a planner, a worker, a goal setter. Joe, on the other hand, liked magic and spent hours teaching himself new tricks to amaze his friend, he was also something of a problem solver.

The combination of Bob's planning and Joe's creativity they built themselves an ultraviolet lamp and discovered that some of the chemicals used at their father used in his pharmacy glowed in the lamp's light. This accidental discovery made them want to discover more, so they went to their local library (I love that part, by the way) and began exploring the glowing properties of different chemicals. All of their experimentation led them to a life of selling and improving their product. Eventually, in Cleveland, OH, they created the Day-Glo colors, tested them on a billboard in Sandusky, OH and VOILA! fluorescent paints were invented.

I like the story of the brothers' mistakes and accidental discoveries. I can see this book being used to teach scientific inquiry in upper elementary classes. It can certainly be used to encourage kids to not give up, but learn from failures.

The illustrations by Tony Persiani are black and white until the brothers start experimenting with the glow properties, and then the book gets brighter and brighter with the neon that seems to be making a bit of a comeback right now. I like the simple black line drawings that remind me of the educational and training cartoons from my childhood.

You can read other reviews at:
Cynsations (author interview)
Semicolon
Fuse #8
Abby the Librarian
Posted by Bill at 11:22 AM