CYBILS 2009: What Darwin Saw: The Journey That Changed the World 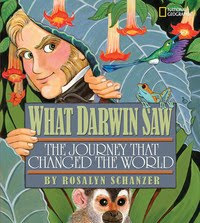 If my math is correct, and keep in mind I haven't had to teach it for 2 years or so, there are three titles nominated about Charles Darwin. Now I know this is the bicentennial of his birth, and I know he shares a birthday with Abraham Lincoln, but I'm still surprised at the number of new picture books about Charles Darwin. He seems a much more complicated figure than can be covered in a picture book, however, What Darwin Saw: The Journey That Changed the World by Rosalyn Schanzer does a good job of bringing the subject matter down to a kid friendly level.

After a brief introduction to Mr. Darwin, the book begins to look like a graphic novel with short text, entertaining, action filled illustrations and most of the information takes the form of speech bubbles. The book is done in first person with Charles Darwin sharing his observations of his travels through the jungles of South America, Tierra del Fuego, and the Galapagos Islands.

I love the pictures showing his discoveries, especially the section called "The Mystery of the Big Bones." Drawings of his discoveries are shown and then drawings of what the creature may have looked like are superimposed over them. The animals are drawn sometimes in humorous caricatures, like a frightened lizard playing dead, and sometimes more realistic like black lizards and giant tortoises of the Galapagos Islands.

Overall, I like this one and think kids will too. The info is not too heavy handed and presented with enough humor that it should keep their interest. The fact that it is published by the National Geographic Society lends a good deal of credibility in my opinion.

You can find other reviews at:
Charlotte's Library
Great Kids Reads
Simply Science Blog
Posted by Bill at 5:24 PM