The Small Adventure of Popeye and Elvis (I just couldn't wait!) 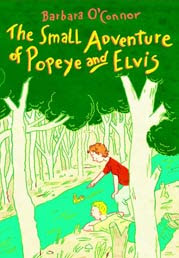 So the original plan was to read this advance from Barbara O'Connor on the bus to Boston, but I just couldn't wait. Rather than pack and get ready to go, I sat down and finished this gem in about 2 hours!

As usual, Barbara O'Connor's characters are strong and original. The main character, Popeye, is a boy living with his grandmother just waiting for something to happen. For him it's the beginning of summer and he's not looking forward to every day being the same as the one before. Growing up in the middle of a dysfunctional family, absent mother and father, an uncle who gets into trouble over and over, Popeye is being raised by his grandmother, Velma. Velma's big fear is "cracking up" and so she puts herself through mental exercises to keep it from happening. Her favorite is to recite the English royals in chronological order so the story is interrupted time and again by Velma's recitation. Another favorite brain exercise is to work crossword puzzles and so Popeye's vocabulary grows word by word at Velma's insistence. The reader will find periodic words and definitions throughout the book at appropriate places in the story.

Outside of Popeye's house, excitement shows up in the form of a family who lives in a big old Holiday Rambler that gets stuck in the lane. Six kids live with their mom and dad, the oldest is Elvis. Popeye is introduced to the kids when he invited to join the "Spit and Swear Club" whose main purpose is to spit and swear, of course. Elvis is an adventurer and is used to a lot less adult supervision than Popeye and so the two decide to have an adventure, a small adventure.

This is where Barbara O'Connor hooked me! The boys decide to wander down to the creek to look for an adventure. At first is seems that nothing ever changes until they spot a Yoo Hoo boat, a boat made from a Yoo Hoo chocolate drink box, floating downstream. When they catch it they discover a mysterious note inside and decide they will walk up the stream until they find out who sent the boat. For Elvis this isn't such a big deal, but Popeye has instructions to stay within hollerin' range of Velma, and he fears Velma's wrath, one of the vocabulary words he has learned.

I say this is where I was hooked because of the simplicity of the adventure! It's just a stream, in a typical wood, where boys play all of the time, but when a Yoo Hoo boat comes floating by it is transformed into just the small adventure two boys are looking for. It reminded me of my summers growing up when we would take a baseball bat and a flashlight and crawl into the storm sewer tunnel near my house. We would walk for what seemed hours even though we were warned to stay out, and somehow we always ended up at the same place, the corner right next to my house, but it was an adventure. On a recent visit back I noticed they had put chain link over the entrance to the tunnel, spoil sports, so much for adventure!

In the end the boys find the source of the boats and the meaning of all of the mysterious clues. I don't want to say too much because I don't want to spoil anything. The simplicity of the story make this an enjoyable quick read and Barbara O'Connor's word choices and descriptions are as strong as ever. She has done it again, a warm, inviting, story that kids are going to love. If you missed it on my earlier post, check out the book trailer here.

I was so excited about the book that I already created a mosaic that I won't be able to use for a while but here it is anyway. By the way in response to a question in the comments, Mandy, I don't have a pink bus in my backyard, deed restrictions or something, the pix all came from Flickr. 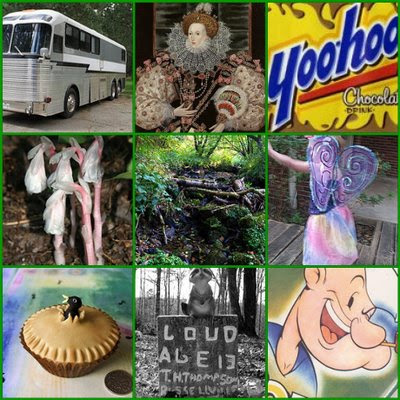