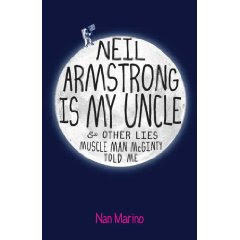 ...and now for a variation on a theme... Neil Armstrong is My Uncle & Other Lies Muscle Man McGinty Told Me is a novel based in July of 1969 that is very well written. Don't let the title fool you, it's not a funny book, though it does have some humorous parts to it, but it is an interesting look at life in 1969.

Tamara Ann Simpson is an angry girl. She lost her best friend, a foster child, while she was away, her family is dysfunctional with a brother in college that is a bit of a hippie, a mother who smokes and watches soap operas for extended periods and a father that hates being stuck in the work rut of getting up everyday to catch the 7:11 train. She is surrounded by kids with fairly normal family routines and lives next to the "picture perfect" family that celebrates every occasion with an elaborate theme party that the Simpsons never get invited to. And then Muscle Man McGinty moves into the foster grandma's house and Tamara absolutely cannot stand his bragging and lying, The opening paragraph says it all about her feelings for Muscle Man.

Muscle Man McGinty is squirrelly runt, a lying snake, and a pitiful excuse for a ten-year-old. The problem is that no one on Ramble Street knows it but me. In the entire town of Massapequa Park, only I see him for what he really is. A phony.

And so, Tamara sets out to reveal what she perceives Muscle Man's true identity to all of the kids of Ramble Street. What ends up happening is that Tamara is the one who is revealed, the unhappiness she lives with eats at her and causes her to be extremely mean to Muscle Man.

I like the way that first time author Nan Marino hints at the sadness that Muscle Man McGinty has seen in the first part of the book. I really like the way his tragedy is finally identified. I really like the character of Muscle Man who maintains his sunny outlook on life in the face of great sadness. True, he is a liar that tells some whoppers, including the title, but in the end it's clear that it's his way of coping with the reason he is a foster child. Even though Tamara can't stand Muscle Man it's clear that he is always trying to make her happy and all he wants is for her to be his friend.

Nan Marino is librarian who has a really cool website here. It has cool stuff that relates to the book including what's real and what's not, links to some Apollo 11 info, and pix of her with astronaut Buzz Aldin.

I have to add this to my Newbery short list, along with another first novel, Also Known as Harper.
Posted by Bill at 4:04 PM