Pippo the Fool is Coming to THE PIT 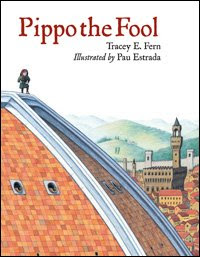 It's hard to believe that the start of school is only a little over a month away. OK, I wish I hadn't said that, but it's true and so I have begun a tentative list of things I want to be sure to read in THE PIT to start the year. The list is still very fluid because I know between now and then I'll find a lot more to add to my list. Pippo the Fool is one I'm sure of because of its wonderful story and beautiful, colorful illustrations.

Based on the true story of Filippo Brunelleschi, the architect of the dome of Santa Maria del Fiore in Florence, Italy the story is an inspiration to creative types everywhere. If you're like me, the

whole Santa Maria thing may not have meant much to you, and even without any historical background, Pippo the Fool is a special book. The fact that author Tracey E. Fern (cool website) can base such a tale of perseverance on historical fact only serves to make it better.

Pippo, like Filippo the actual man the character is based on, is a talented goldsmith and jeweler. He is also a tinkerer and inventor, a mechanic and architect. When a contest to design and build the dome on the cathedral is announced, Pippo decides to enter. Immediately, the town begins to laugh behind his back and the most famous sculptor, Lorenzo, mocks him publicly. Pippo is not discouraged and begins to create a design for the dome that is unlike anything seen before with an interior means of support, and special interlocking bricks to make it even stronger. When all of the ideas are presented, the judges are disappointed in what they see. Even Lorenzo's idea is far fetched and not set in fact only in theory without detail.

When Pippo presents his plan without detail for fear of Lorenzo stealing his idea, he is carried out of the cathedral and dropped in the center of the piazza. He decides to show the judges his idea by building it in miniature. When it was finished, the judges were impressed and awarded the prize to Pippo and named Lorenzo his assistant. Of course, Pippo does all of the work to the point of exhaustion and when he needs to rest in bed, Lorenzo is unable to get anything done because he hasn't been there. Pippo works for 16 years until the dome is completed to the joy of the entire city from the market women to the judges. His nickname is changed from Pippo the Fool to Pippo the Genius and everyone has a new found respect for the goldsmith and jeweler, tinkerer and inventor, mechanic and architect.

Artist Pau Estrada's artwork is beautiful and compliment the story wonderfully. His rich colors and detailed drawings of the Florence architecture are a joy to study. Kids will find new things in the pictures every time they look at the book. 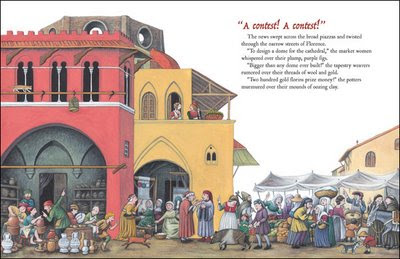 I know this book will be a hit with my students in THE PIT and I can't wait to share it with them...well...ok...maybe I can wait another month or so.

By the way, I'm leaving for my second trip to Boston on Thursday with 42 kids and 4 teacher friends so there won't be a new post for a while. I'm pretty excited today because when I went to my mailbox I found an advance copy of Barbara O'Connor's new book The Small Adventure of Popeye and Elvis. Is that a great title or what!? Hmmmm...I wonder what I'll read first on the bus?
Posted by Bill at 3:18 PM