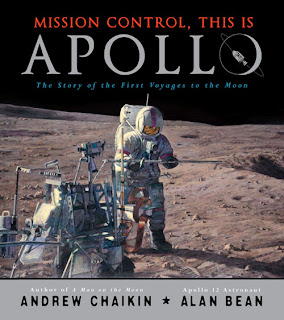 I was 7 when Neil Armstrong stepped foot on the moon, and I was BIG into the space program at the time as were most kids I think. It's pretty exciting for me right now to read all of the stuff coming out for the 4oth anniversary of the landing. When I read Karen's post yesterday I thought I'd continue the theme with Mission Control, This is Apollo written by Andrew Chaikin and illustrated by Apollo astronaut Alan Bean.

Each chapter in the book follows a different Apollo mission from the tragedy on the launch pad of Apollo 1 to the triumph on the moon of Apollo 11 to the nerve racking flight of Apollo 13. Andrew Chaikin writes some of the well known facts and includes a lot of behind the scenes information that always fascinated me as a kid. Information like how the astronauts trained, how they eat and how they go to the bathroom in space. The book includes interviews with many of the astronauts that flew Apollo missions in which they not only talk about the science of their flights, but also their wonder at seeing an "Earthrise" from the moon. I was fascinated to read how inspired many of them were by the total desolation of the moon and silky smooth blackness of the sky around them. It's something only someone who has been there can appreciate. The whole book is written in a way that kids who love space and science will really get into and understand. The other part of the book, the pictures, will appeal to all kids.

After retiring from the space industry, astronaut Allan Bean became an artist, a painter. It was something he dabbled in and practiced all of his life, but in retirement he could devote time to it. Many of his paintings appear in the book, all of them are taken from actual events from Apollo missions some that he flew and some that he didn't. The process he uses is described in the back and I was intrigued by what he does to create his artwork. He adds texture to his work with the sole of the boots he wore on the moon and a geological hammer he used on the moon, but the really awesome thing is, that each of his space paintings include a little bit of the moon in them. Since he was unable to get any actual moon rocks from NASA, he ground up the patches from his flight suit that still had traces of moon dust on them,

and he puts a bit of the dust in each of his painting. Go here for a detailed description of the process. In addition to that coolness, Alan Bean's paintings are beautiful, portraying the feeling of space in a way that only someone who has been there can.

This is a beautiful celebration of one of our country's proudest times and I can't wait to share it with the kids in the library.
Posted by Bill at 5:53 AM