I Want To Be Free 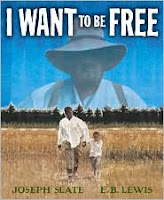 I Want To Be Free, a story written by Joseph Slate and illustrated by E. B. Lewis is actually a retelling of a story from the sacred literature of Buddha. Slate says about this retelling, "I moved its setting and language to another time, as I believe its themes to be universal." Lewis, the illustrator, was even a little more specific. He moved the setting to the Underground Railroad of Kentucky and Ohio. He even spent some time touring the Rankin House in Ripley, Ohio trying "to reflect on the risky and humane actions that helped free slaves during those times."

In this retelling, the topic is slavery, and how a slave escapes. The story is written in verse, and has a refrain that does a lovely job moving the story along:

This refrain captures well the theme of the story -- freedom.

Beside the fact that this story is written in a lovely verse style and the fact that the pictures done in watercolor by Lewis greatly enhance the text, I had to purchase this book after reading it because I think it will be a great platform to discuss with my students what the institution of slavery was like. This is a topic I need to address with my 5th graders, and this book will be the perfect starting point.

There is a second part of this story, however. During his escape, the runaway slave comes across an orphaned child who is crying. Instead of leaving him behind for the master and his dogs, he takes the child with him. A much harder journey for the slave, but in the end, because of his actions, he finds both redemption and total freedom.

I Want To Be Free is another "must have" for me in order to enrich my social studies' instruction.
Posted by Karen at 9:45 AM

Email ThisBlogThis!Share to TwitterShare to FacebookShare to Pinterest
Labels: E. B. Lewis, I Want To Be Free, Joseph Slate, slavery