Picks From the Pit Read Alouds 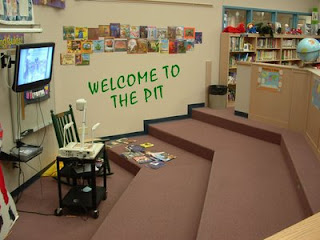 I haven't listed what I've been reading to the kids lately, so I thought I'd give an update. As I've said before, generally, I read the same book to all of the kids. This started as a way to keep my sanity, not coming up with a bunch of titles every four days, but it's turned into something really good for our school! Kids are talking about books, and they're using common language at the dinner table, in the hall, in the classroom and on the playground. Every student, grades 1 through 5 know what the PICK FROM THE PIT is for that library rotation. This year I have switched up a bit for the kindergarten and preschool students in our building, but even they have heard some of the same books as the "bigger" kids. So, without further ado, here are the picks thus far:

Big Plans: I reviewed it here, and the kids liked it a lot. This was the first Pick from THE PIT, to hit the road when I read it to my sister's class in Ashland, OH!

Wild Boars Cook: What could be more fun than a bunch of wild boars cooking a MASSIVE PUDDING! The last two words must be said loud enough to be heard in the classroom above the library! Franki reviews Wild Boars at A Year of Reading.

Beware of the Frog: I love the surprise ending of this one, and was sure to be watching the kids' faces when it was revealed. I reviewed it here.

Baron von Baddie and the Ice Ray Incident: A silly little book with great collage looking pictures. Read with a cheesy German accent made it fun and brought out some good laughs.

Old Bear: I read this to kindergarten and preschool only. The colors in the pictures make for another Kevin Henkes classic.

Class 3 at Sea: Again, only to the younger kids, a rhyming book about a class field trip taken over by pirates. A fun twist has the teacher and a pirate getting married. They little kids love the pirates and silly pictures

The Retired Kid: I reviewed it here and even though some of the first graders had trouble with the concept of being retired, they still liked the pictures and some of the story, especially when he sits on the false teeth.

Goodnight Moon: Not a favorite of mine, I know, I know, that's almost blasphemy in the world of children's lit, but it's the truth and I feel better for saying it! I read it to set up my next pick.

Goodnight Goon: A "petrifying parody" of Goodnight Moon. Very fun with "Goodnight tomb and goodnight goon" to "goodnight moans and goodnight groans!" Read with the best spooky voice you can conjure up this book is pretty fun for the Halloween season.

Have fun with the list, and let me know about your experiences if you try any of my suggestions.
Posted by Bill at 7:42 PM