Itch is a Favorite Novel This Year 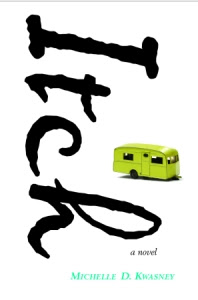 Each month when the new issue of School Library Journal comes out, I immediately turn to the reviews. I know it's a geeky librarian thing, but I really can't wait to see what's new. Unfortunately, right now I'm about a month behind in my reading as I have been busy working to become a better librarian by taking a class working toward my librarian teaching certificate. So when I read a really good book in my limited free time, I get very excited. I had not heard of this book, but the review looked interesting so I reserved a copy at my branch of the public library, and when I started reading it, I couldn't put it down.

Set in 1968, Delores Colchester, called Itch by her grandfather, is being raised by her grandparents in Florida. Life is good, she's got a best friend who isn't all prissy and likes to fish. She's got a grampa that loves her and his 1958 turquoise convertible Chevy Bel Air, a gruff but loving grandma that worries about her all of the time, and a thinking swing. Suddenly, grampa has a heart attack and dies in his sleep while sitting in his favorite automobile, and Itch's life is about to change drastically. In order to move on, Grandma Eunice decides to move the both of them to Ohio to a trailer next door to her cousin Effie. Since they can't drive, they hire one of the locals to drive them and their belongings to Ohio and Itch starts her new life.

On one of her first days in Ohio, she discovers the fairgrounds and a girl about her age, Gwendolyn (Wendy), twirling her baton as she practices for the talent show that will open the fair. The two become friends, and Itch and her grandma attend the show to see Wendy win for the sixth time in a row. Something doesn't quite add up for Itch when when she watches Wendy perform, for all of the perfection, Wendy just doesn't seem too happy. The two meet up again during the first weeks of school, although Wendy isn't in school for the first several days, and Itch becomes friends with the other girls at the Breck Girl table, Anne Marie and Connie. Not exactly the kind of girls that Itch would have been caught dead with before, she makes it work along with another friendship with Billy the paper boy who is also in school with them.

Itch begins to see that Wendy's "perfect" life of dance lessons, stage presence coaching, baton lessons and competitions isn't all it's cracked up to be. She also begins to see the evidence of abuse on Wendy's back and legs. Itch becomes intrigued and starts to ask questions that are answered with vague excuses of absence from school due to sickness and general clumsiness. Eventually Itch witnesses an episode in which Wendy is abused by her mother and finally has the courage to speak up thanks to her grandmother's help.

The characters in this book are awesome. I love Itch's grandfather who is a no nonsense guy who is not afraid to stand up for what is right. He speaks his mind when he has an opinion, and probably loses friends for it, however, when he passes on, everyone in town attends his services out of respect. He is also full of homespun advice that sticks with Itch, even when he's gone.

Grandma Eunice is a tough old gal who cares deeply for her grand daughter, but shows it in different, less affectionate ways. One of my favorite parts of the book is watching Itch and her grandma grow ever closer after grampa dies.

Itch and Billy Applegate develop a friendship that borders on the like, like variety, but author Kwasney keeps it simple and innocent as it should be.

All in all, this is a fabulous book! Even though it deals with such a serious topic ,author Michelle D. Kwasney manages to mix in some humor through the grandparent characters. Itch: a Novel develops characters and builds the plot to the climactic events about as well as anything I've read this year and the beauty of it is, is that this book can be read and understood by our fourth and fifth grade readers. I'm not sure how this book didn't receive much attention, it's one of the best I've read this year.

And finally, the cover really caught my eye, there's something about those books with trailers on the front this year!
Posted by Bill at 4:07 AM