I've been working my way through the ALSC Notable Nominee list and have read almost all of the picture books included.  I recently finished two from the non fiction category and will be adding both to our Bailey Library collection. 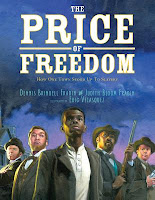 The first, The Price of Freedom: How One Town Stood Up to Slavery by Judith Bloom Fradin and Dennis Brindell Fradin has a special place because it is about a couple of Ohio towns that resisted the Fugitive Slave Law prior to the Civil War.  Oberlin, OH was a safe haven for escaped slaves in the mid 1800s.  Not only did they hide them from the slave catchers who wanted to send them back south, they accepted them as part of the city's culture.  Escaped slaves were teachers, shopkeepers, farmers and preachers.  In 1856 when a slave catcher came to town looking for slaves to capture and return for the bounty, the towns of Oberlin and Wellington, OH turned out to not only protect their neighbors, but also help one prisoner escape.  The story of this event is told in vivid exciting language that puts the reader in the middle of the action.  In the end, 37 men were charged and arrested for aiding in the escape of a slave.  One of the men, William Lincoln was arrested in his classroom while teaching students, in, wait for it....Dublin, Ohio!  I love when a book has a hometown connection and it always makes it an easier sell to students when part of the story is part of their own town's history.  The illustrations by Eric Velasquez are detailed and enhance the story, making it easy for the reader to picture the events as they happened.  The final picture is an actual photo of the arrested men standing outside the Cuyahoga County Jail. 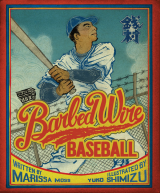 The second, Barbed Wire Baseball by Marissa Moss, is a fairly common theme about how baseball played an important role in helping Japanese Americans survive the internment camps of the 1940s.  This one, however, stands out because it is about an individual who led the prisoners in a camp in Arizona to building an actual baseball stadium.  Kenichi "Zeni" Zenimura was a ball player.  He grew up with the game and even though he was barely 5 feet tall, he played along side the giants of the game like Babe Ruth and Lou Gehrig in exhibition games.  He literally brought the game to a large part of the Japanese American population and introduced it in his native country.  This is a wonderful story that not only teaches a sad piece of our country's history, but also lessons in perseverance and making the best of a horrible situation.  Zeni Zenimura is a true American hero.  The illustrations are by Yuko Zhimizu are fascinating.  The texture and colors along with the style bring to mind old time baseball cards.  I'm sure kids will love looking at them and seeing different things each time they do.