Better Nate Than Ever a Showstopper 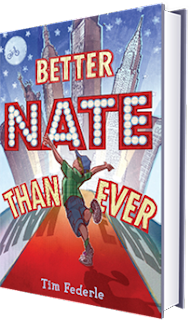 As I read through the ALSC Notable Book Nominee list, I've found some books that I really like but probably are written for a little older audience than the students I have.  The beauty of this is that we have the best public library anywhere in our community.  My students have easy access, a bike ride on beautiful bike paths, to a branch of the Columbus Metropolitan Library.  Since I have to be fairly selective to stay in my budget, I can make recommendations of books that can't be found on our shelves but can be reserved at the "big library" as we call it at Bailey.

One of those books is Better Nate Than Ever by Tim Federle.  Nate Foster is a theater kid.  He  loves musicals and stage shows and dreams the Broadway dream of making it in New York City.  The problem is, he is growing up in a suburb of Pittsburgh that doesn't really value the arts, in fact his school, like many is cutting funding and the performing arts are getting hit hard.  In addition to standing out for his love of theater, Nate has an older brother who is the star athlete and everything else in their hometown.  Nate is the brunt of every bully in town and tries to play it off with a laugh, but can only take it for so long.

His best friend Libby transferred to his school from a school for the arts and the two of them work together to make Nate's dream come true.  After practicing and working on his acting skills, Nate and Libby plan his secret get away to the Big Apple for a tryout.  He is hoping for the role of Elliot in a stage production of E. T.  Of course the trip doesn't go quite as smoothly as planned and through the ups and downs of making a dream come true we find out a lot more about Nate and his family.

We learn that his mother and father are having marital troubles.  Nate is actually rescued by an estranged aunt who also had the Broadway dreams that lives in New York and his star student athlete brother shows a chink in the armor discovered by Libby as she tries to cover for her friend back home.

The author actually had a similar experience as a teen, running off to New York which is probably why the writing in this book is so strong and credible, a great example of writing what you know.  I love this book for middle schoolers, boys and girls who feel like they don't quite fit.  Even with its drama and sadness, there is laughter and hope that its ok to be different.
Posted by Bill at 8:58 AM