The Dark Comes Alive in The Dark 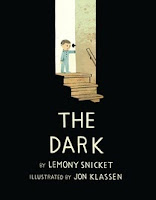 Lemony Snicket and Jon Klassen have teamed up on a book that I'm sure will be a hit and fun to read in THE PIT.   The Dark is about a boy and his fear of the dark.  However, in Lemony Snicket style, there's twist.  The Dark is an actual thing!  It hides behind the shower curtain, in the closet, and at night it "goes out" spreading itself against the windows and doors.

But these are just hiding places for The Dark.  Everyone knows The Dark lives in the basement where Laszlo greets him each morning from the top of the stairs in order that The Dark won't come visit him in his room at night.  One night the night light burns out and lo and behold, The Dark has come to visit Laszlo's room.  In a fun twist, The Dark leads Laszlo on a quest to solve the problem and the story has a very satisfying ending.

I won't lie, I haven't figured Lemony Snicket out yet.  Kids love his stuff and that's good because that makes my job easy.  I keep trying to love his stuff, but mostly it confuses me.  This book however, I get and I like, A LOT!  Throw in illustrations by Jon Klassen, one of my favorite illustrators and BAM!  it's a winner.
Posted by Bill at 9:44 AM