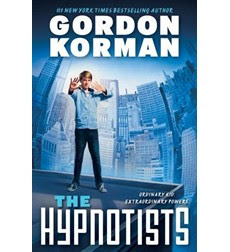 Frequent visitors to Literate Lives know that I'm a big Gordon Korman fan, in fact, if there was a Gordon Korman fan club I'd be a card carrying member with the secret decoder ring and knowledge of a secret handshake, that's how big a fan I am!  I have liked everything he has written and I know when it has his name on it, kids are going to love it too.  His latest, The Hypnotists, is no exception, it gets you from the start and mesmerizes to the end.  It also leaves you wanting more, which I'm sure we'll get because that's how Gordon rolls.


Jax Opus seems to be just a normal 12 year old middle schooler, dealing with the usual middle schooler issues.  There is one small difference, people are drawn to him and want to do whatever will make him happy.  Oh yeah, and his eyes, his eyes which seem to change colors depending on his mood.  Two events lead Jax to start believing he might have some special ability.  The first is during a basketball game when the best player in the league seemingly does whatever Jax suggest he do.  The second comes during a school field trip when he controls a hypnotist on stage.

Turns out the hypnotist has connections to a man named Elias Mako and the next thing the Opus family knows, Jax is being recruited for a special school for special kids with special abilities.  Turns out, Jax is "mind bender" meaning he has the ability to enter another person's mind and control their actions without them knowing it.  As it turns out he comes from a long line of super mind benders on both sides so he is like a super mind bender.

All of this leads to trouble, with a villain who wants to use the power for evil world domination and the troop of misfit mind benders called the Sandman Guild who are trying really hard not to take advantage of their special gift.  Classic evil versus bad, but trying really hard to be good, stuff.  I loved it!

As usual, Gordon Korman writes in a style that is very kid friendly.  The kid characters in his books are all regular kids with a bit of twist, but the twist is done so that even that is believable.  The adventure and action keep you on the edge of the seat and just when you think you have it figured out...you don't.  I'll be recommending this to all of my 4th and 5th graders and some better 3rd grade readers.  It's just good fun!
Posted by Bill at 9:59 AM